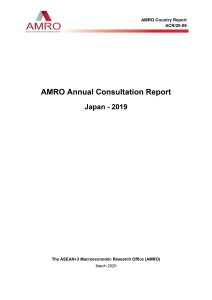 In addition to an assessment of recent economic developments, the 2019 Annual Consultation Report on Japan covers key issues related to the Japanese economy, including Japan’s new fiscal stimulus package and the country’s recent consumption tax hike.

The Japanese economy is projected to expand by 1.0 percent in FY2019 before slowing to 0.6 percent in FY2020. Japan’s services sector—with solid capex investment and strong inbound tourism—provides some support to the economy against weaker external demand.

The Japanese economy is confronted with downside risks in the near term, mainly from external factors. These include a sharper-than-expected slowdown in China and the global economy, and a re-escalation of the U.S.-China trade tensions. The effects of the consumption tax hike in October 2019 on private consumption are expected to be less severe than those of the 2014 tax hike, due to the government’s countermeasures. However, there is a risk of prolonged weakness in private consumption amid weak consumer sentiment.

AMRO recommends that Japan’s fiscal authorities step up their efforts toward improving fiscal sustainability. The current easy monetary policy stance should be maintained to support growth and counter disinflationary pressures. The country should continue to pursue its structural reforms comprehensively to enhance the economy’s growth potential and to address the challenges of an aging population.