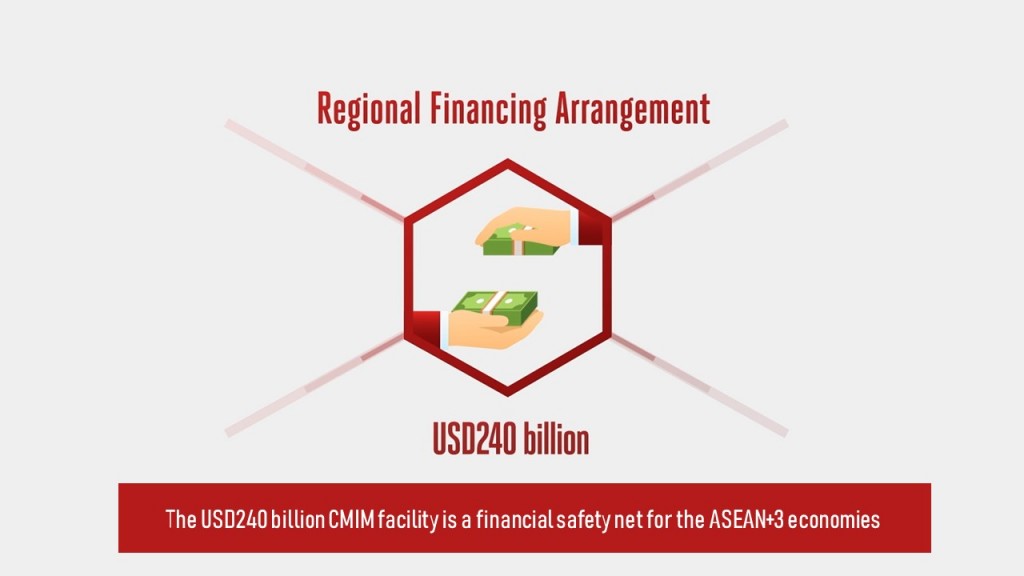 With a total financing capacity of USD240 billion, the Chiang Mai Initiative Multilateralisation (CMIM) is the world’s second largest regional financing arrangement (RFA) among active RFAs, after the European Stability Mechanism (ESM) and much larger than most other arrangements in non-European regions. However, despite its impressive financing power, the CMIM has a disproportionate allocation, with a significant portion allocated to the three largest member economies.

China, Japan and Korea—least likely recipients of the CMIM—have a total allocation of 48.6 percent, while Cambodia, Lao PDR, Myanmar, and Vietnam have a total allocation accounting for less than five percent of CMIM’s total lending capacity. This amount is smaller than what they could request from alternative resources, such as the International Monetary Fund (IMF).

As the CMIM has never been activated, little evidence is available to justify for adjusting the overall size of the CMIM or to mobilize political momentum for increasing CMIM resources at present. Hence, the practical approach would be to put CMIM’s existing resources into efficient use by ensuring that: 1) resources are allocated in accordance with members’ potential needs, and 2) use of resources is flexible enough to address unforeseen challenges while safeguarding lenders’ interest and sustainability of CMIM resources.

The maximum amount each member could access from the CMIM—known as Maximum Arrangement Amount (MAA)—was decided based on two parameters.

The fact that each member’s MAA is fixed at a predetermined amount offers some benefits. It prevents overreliance on CMIM resources which minimizes the risk of resource exhaustion and may discourage the first-come-first-serve practice characteristic of financial support without the fixed allocation of resources. Concurrently, there are some undesirable consequences inherent in the current system of resource allocation.

The current fixed allocation limits CMIM’s ability to flexibly address the balance of payment or liquidity difficulties. However, access to a considerably larger portion of the CMIM allocation than what the fixed MAAs allow may sometimes be required to restore market confidence, especially in the event of a capital account crisis. This is one of the reasons the IMF allows exceptional access above the normal limit under certain conditions and why the ESM does not limit the size of members’ access.

Moreover, the sum of MAAs allocated to Cambodia, Lao PDR, Myanmar, and Vietnam represents only a small fraction of CMIM’s lending capacity, even with the adjustment of MAA based on members’ potential needs. The amount allocated to ASEAN members collectively, for which the CMIM will most likely be activated, amounts to a little over half of the total capacity.

The idea of flexible purchasing multiples (FPMs) is to address the shortfalls in the current allocation rule identified above and to enable efficient use of CMIM resources. It consists of flexibly increasing MAAs of more likely beneficiaries of the CMIM on a temporary basis to meet unusual financial challenges, while introducing safeguards to manage credit risks that may be incurred. The main principles and modality of FPMs are briefly described below.

First, FPMs would be used only when exceptional financing is justified, while current MAAs would be applied on most requests. Similar to IMF’s exceptional access policy, the size of financing needs would be determined on a case-by-case basis.

Second, FPMs would be designed to better represent members’ potential need for financial support in the allocation rule rather than based on their financial contributions to the CMIM.

Lastly, there should be a balanced consideration between promoting needs-based financing and securing the sustainability of CMIM resources. Setting clearly defined criteria for approving FPMs would control CMIM’s exposure to credit risk. Where the size of FPMs is concerned, adopting an IMF-type exceptional access policy with no predetermined limit may be premature, considering the CMIM’s lack of experience in actual activation.

At the initial stage, FPMs should be introduced on a limited scale so that the impact on CMIM’s readiness to support the whole membership would be minimized. To illustrate, if FPMs are allowed for Cambodia, Lao PDR, Myanmar, and Vietnam, and their MAAs would temporarily increase up to three times the normal limit, the increased portion would still account for less than 10 percent of current CMIM financing capacity, allowing the CMIM to continue supporting all ASEAN members concurrently.

Adequate financial capacity to meet prospective needs is one of the prerequisites for well-functioning RFAs. The proposal of FPMs aims to enhance CMIM’s capacity to address crises in a more flexible manner without increasing the total size. Concurrently, it should be noted that increasing resource size is not a panacea for the CMIM to enhance its effectiveness. The current CMIM objective is focused on addressing short-term liquidity issues. As pointed out by some members, the current CMIM has limits when it comes to dealing with structural issues. Therefore, other initiatives such as introducing a new facility specifically designed for structural issues may be necessary.