Extreme liquidity shortage during the Asian financial crisis of 1997-1998 and the global financial crisis of 2008-2009 have motivated some ASEAN+3 economies to initiate bilateral swap arrangements (BSA) with countries either inside or outside the grouping. These BSAs have the potential to supplement liquidity safeguards provided by International Monetary Fund facilities and the ASEAN+3 region’s own USD240 billion multilateral currency swap arrangement, the Chiang Mai Initiative Multilateralisation (CMIM).

BSAs and the CMIM share the same objective of providing short-term liquidity support. Both can strengthen ASEAN+3 economies.

BSAs in the region

Currently, ASEAN+3 intra-regional BSAs total approximately USD381.6 billion, an increase of 15% when compared with end-2020, with the larger size attributed to the greater portion of the People’s Bank of China’s swap lines with the Hong Kong Monetary Authority, Bank of Korea, and Bank Indonesia.

More than 90% of swaps are arranged in local currencies. BSAs may be initiated based on diverse objectives and depend on the common interests of both parties. Generally, BSAs serve to 1) ease pressure on currency funding markets, 2) mitigate balance of payments needs, 3) facilitate trade and investments, and/or 4) promote currency internationalization.

Typically, swaps between the Ministry of Finance in Japan and ASEAN emerging markets are examples of BSAs that serve the first two purposes, as they provide US-dollar liquidity support. Meanwhile, the Bank of Japan’s swaps with partner countries are designed to serve the first purpose, should their respective financial institutions face unexpected difficulties in local currency settlements. For China, BSAs are more relevant in serving the last two objectives, in addition to financial market stabilization and the desire to use local currencies.

In contrast, swaps among the ASEAN-5 countries (Indonesia, Malaysia, the Philippines, Singapore and Thailand) highlight the objectives of facilitating local currency settlements in trade and investment and stabilizing financial markets; given the deeper integration of trade and finance among such economies, as seen by the swap agreement between Bank Indonesia and Bank Negara Malaysia, and the one between Bank Indonesia and the Monetary Authority of Singapore.

While the size of BSAs has increased, coverage is uneven and mainly concentrated among China, Japan, Korea and the ASEAN-5. Lao PDR has swap lines with China, but Brunei, Cambodia, Myanmar, and Vietnam have yet to engage in BSA cooperation. In general, the absence of significant trade and financial linkages could lead to a lack of BSA partnerships.

Some ASEAN+3 economies have also initiated swap lines with countries outside the region, either in US dollars or local currencies, totaling approximately USD411 billion to facilitate trade and investment, provide liquidity for financial markets or for financial stability.

BSAs globally increased significantly after the global financial crisis, totaling USD1.89 trillion in 2020 from USD6 billion in 2000 among advanced and emerging economies, including ASEAN+3 economies. Below are some of the salient characteristics of BSAs.

• Diverse objectives. The motives for BSAs are diverse. Typically, BSAs are established in accordance with the implementing countries’ specific needs.

• Strong signals to markets. BSA lines can be drawn at any time, helping calm markets in times of stress and contributing to financial stability. BSAs also serve as liquidity backstops even for countries with large foreign reserves. For example, the Fed’s swap lines during the onset of the COVID-19 crisis helped ease strains in the global US-dollar funding market.

• Scalability. Once in place, some swap sizes may be changed relatively easily to meet changing conditions, and are useful for countries anticipating uncertain external situations.

• Different conditions. Bilateral cooperation relies on fulfilling the mutual interest of implementing countries. Consequently, BSAs may come with different conditions vis-à-vis other layers of the global financial safety net, raising concerns on the possible lack of transparency/data available for them to contribute to the global financial safety net.

Table: BSAs in the ASEAN+3 Region 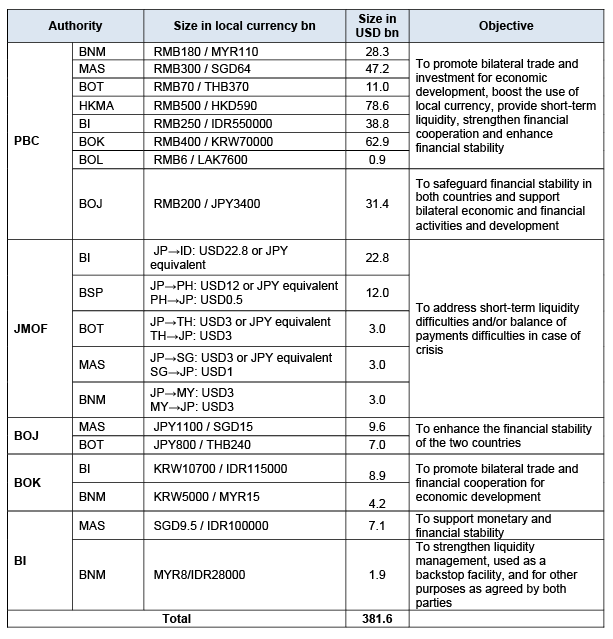