As we enter mid-2018, the global economy continues to pick up, building on the momentum that gathered speed since late 2017. Global growth is on a strong footing, as the multi-speed global economy finally saw convergence, almost a decade after the Global Financial Crisis. The acceleration in growth reflects the stronger-than-expected cyclical recovery in the Eurozone, which was a surprise economic story of 2017. The U.S. also continue to perform favorably, driven in part by sharply higher fixed capital investment. Encouragingly, in the emerging markets sphere, major commodity-dependent economies such as Brazil and Russia are growing again, benefiting from the recovery in commodity prices. With major advanced economies leading the cyclical upswing, global trade has staged a robust recovery after an extended period of sluggishness.

This is good news for ASEAN+3, which includes the 10 members of the Association of Southeast Asian Nations, and China (including Hong Kong), Japan, and Korea, as the improving global prospects suggest that regional growth is expected to be more balanced between domestic demand and exports, easing the pressure on the external position of some ASEAN economies. In the ASEAN+3 Regional Economic Outlook (AREO) 2018 released on 3 May, our baseline growth projection for ASEAN+3 economies is at 5.4%in 2018, which has been revised upwards from 5.1% as compared to our assessments in the AREO 2017.  For 2019, growth is forecast to moderate slightly to 5.2%. The outlook for inflation is expected to be stable, averaging around 2 percent level in 2018-19 for the region. 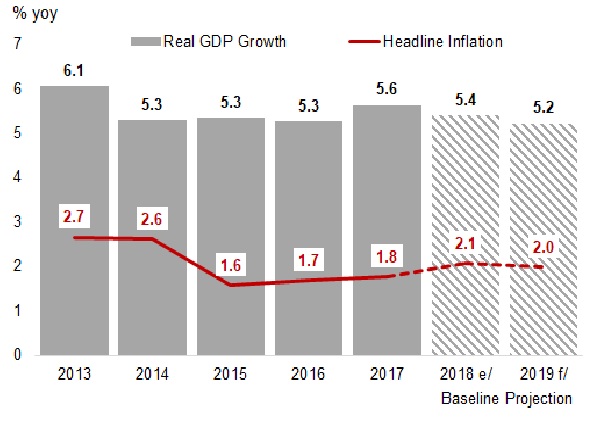 While the global environment is more upbeat, the near term outlook ahead is clouded by two key challenges, which may be mutually reinforcing.

First, since January, global trade tensions have escalated, centered on the U.S. trade protectionist actions. Global equity markets took a beating, although they recovered quickly, as the demand for risk assets plummeted on fears of a trade war. Industrials and technology stocks were amongst the hardest hit, including in the region, as the threatened tit-for-tit trade protectionist measures created uncertainties about the future of an open and rules-based multilateral trade and investment systems.

The risk could interact with a sharper-than-expected tightening in global financial conditions. So far, the outlook for inflation, especially in the U.S., has been benign, despite the U.S. continuing to grow at above-trend pace. Should the relationship between unemployment rates and inflation makes a strong comeback and catches market participants by surprise, spikes in market volatility amid a re-pricing of risk assets could materialise. This might lead to destabilising portfolio  outflows from the region. Although investors have become more discerning and differentiate emerging markets economies based on fundamentals, the risk of a sudden stop cannot be discounted given that the region is the largest recipient of foreign capital inflows (bond markets in particular), amongst all emerging market regions.

To begin with, business as usual is no longer an option. Policymakers should endeavor to rebuild policy space while recognising the constraints from domestic and external vulnerabilities such as high leverage, and high reliance on external financing. Monetary policy in the region is generally accommodative, but tightening global financial conditions ahead would constrain policy space. Therefore, regional economies that do not need further stimulus and/or where external imbalances are building up, should pursue a tightening bias. Where vulnerabilities have built up, macroprudential policies can be applied in a flexible and targeted manner, in order to safeguard financial stability. Similarly, expansionary fiscal policy have led to higher public debt in most countries and it would be prudent to consolidate and prioritize fiscal policy in support of infrastructure investment and structural reforms to lift potential growth.

* This article is the first part of a blog series on growth and resilience in the ASEAN+3 region, which includes 10 members of the Association of Southeast Asian Nations (ASEAN) and China; Hong Kong, China; Japan; and Korea.