SINGAPORE, July 20, 2018 – The Chinese economy has maintained robust growth in the first half of 2018, amid heightened external uncertainties arising from the intensifying trade conflict with the United States, according to the preliminary assessment by the ASEAN+3 Macroeconomic Research Office (AMRO) after its Annual Consultation Visit to the country from July 4 to 17, 2018.

“The Chinese economy is expected to grow at 6.6 percent in 2018 and moderate slightly to 6.4 percent in 2019,” said Dr Poonpatpibul. “Domestic risks have receded due to efforts to curb financial and corporate leverage, while trade tensions have escalated to an outright conflict and posed higher risks to growth. Going forward, the structural adjustment toward quality and innovation-driven growth should be accelerated, helping to mitigate increasing external uncertainties.”

In the first half of 2018, the economy grew by 6.8 percent, mainly driven by expanding consumption, and steady growth in investment and exports. Growth is expected to moderate somewhat in the second half of the year and to register 6.6 percent for the whole year. Inflation has been subdued and is likely to be about 2.0 percent in 2018 and 1.8 percent in 2019.

Reflecting improved corporate profitability, and measures to rein in overcapacity and leverage, domestic risks have receded, which is critical for maintaining overall stability amid rising external risks. Liquidity conditions in financial markets have tightened to some extent, but overall liquidity risk is assessed to be manageable. Credit risks have increased slightly in the corporate bond market, while the nonperforming loan ratio in the banking sector remains low.

The main source of uncertainty and risks is the ongoing trade conflict between the U.S. and China. An escalating trade conflict would lead to a decline in GDP growth for both countries. It would also have major spillover effects on other regional economies through various channels, including disruptions of cross-border value chains and diversion of trade activities.

The authorities have continued with proactive fiscal policy, further supporting structural adjustments. On the other hand, the fiscal position is expected to improve this year, due largely to strong tax revenue on the back of stable corporate incomes and rising consumption and personal incomes. Going forward, the proactive fiscal policy should further support the structural adjustments and can play an important role in mitigating external shocks.

A neutral monetary policy, supplemented by measures to ensure adequate liquidity in the financial system, is appropriate at the current stage, taking into account the process of deleveraging in the financial system while supporting growth in the real economy. Nevertheless, the room for monetary policy to shore up growth in the event of an adverse shock from an intensifying trade conflict has diminished due to rising interest rates in the U.S. and risk aversion towards emerging markets. 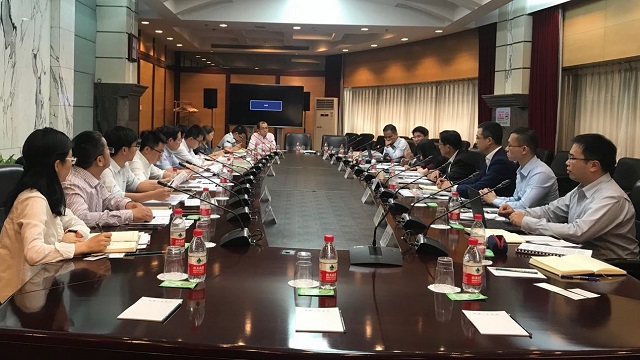 Going forward, China’s economy is entering a new phase of development which is consumption-led and based on innovation and technological upgrading. In particular, improving and expanding the coverage of the social security system and further developing and liberalizing the services sector would help boost domestic consumption. Investment in technological upgrading can be encouraged by further opening up and liberalizing the economy and strengthening protection of investors and intellectual property rights. In addition, further efforts are still needed to curb corporate debt, manage local government debt, and transform state-owned enterprise (SOEs) into more market-oriented entities.

The mission team would like to express its appreciation to the Chinese authorities for their excellent assistance and hospitality. The consultation visit has deepened AMRO’s understanding of China’s current macroeconomic and financial situation, major risks and their potential impact, macroeconomic policy, as well as structural reforms.