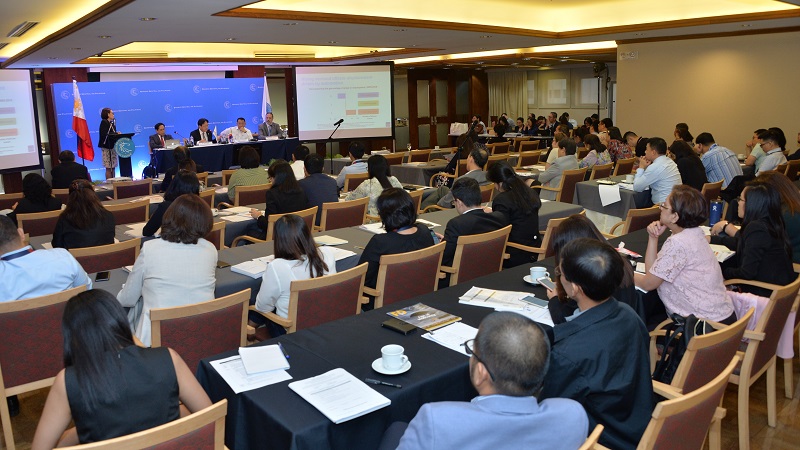 The AMRO-BSP joint seminar in Manila on June 19, 2019, is attended by 80 participants from both public and private institutions.

Despite its disruptive effects, the ASEAN+3 economies can harness technology for job creation and sustainable economic growth. To successfully do so, regional economies need to create a technology-friendly ecology by investing in hard and soft infrastructure. This insight was shared by government officials, economists, and private sector representatives during a seminar entitled “Building Capacity and Connectivity for the New Economy in East Asia” co-organized by the ASEAN+3 Macroeconomic Research Office (AMRO) and the Bangko Sentral ng Pilipinas (BSP) on June 19 in Manila. This seminar is part of AMRO’s outreach program to introduce key findings of its flagship report, the ASEAN+3 Regional Economic Outlook (AREO) 2019, which is published in early May. It attracted an audience of 80 participants from both the public and private sectors. 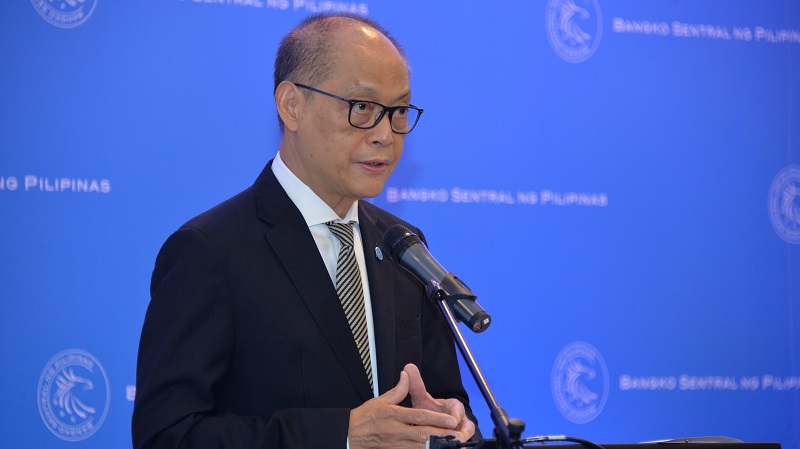 In his opening remarks, BSP Governor Dr. Benjamin E. Diokno acknowledged the enabling effects of technology, and that the Philippines will benefit from embracing technology and transitioning into the ‘new economy’. To do so, the Philippines need to build sustainable infrastructure, engage in digital innovation, and promote regulatory excellence. 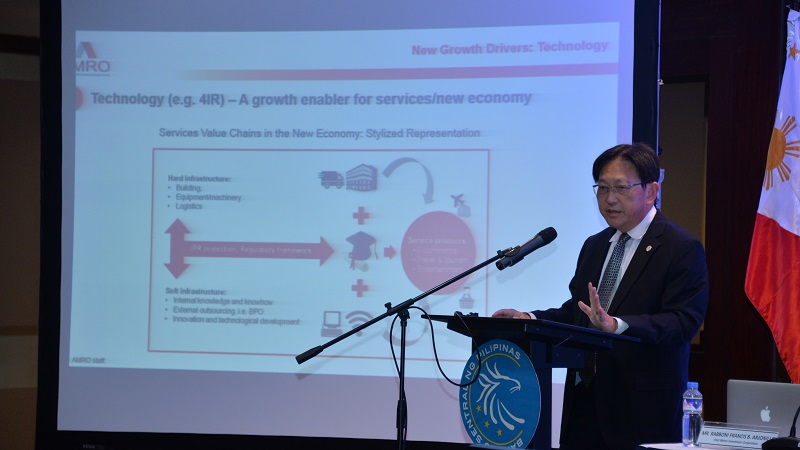 AMRO Chief Economist Dr. Hoe Ee Khor presents on the major risks that the regional economy faces, as well as the importance of technology for regional economies to tap on the ‘new economy’ as a source of growth.

In his keynote presentation, AMRO Chief Economist Dr. Hoe Ee Khor provided updates on the growth projections of the ASEAN+3 region, which has been revised downwards from 5.1%, which is released in early May, to 4.9%. This is due to the intensifying trade war, which has negative spillover effects on trade in the region. He emphasized that these effects are not homogenous across the region. As a services-driven economy, the Philippines is less hit by the trade tensions as compared to open economies that are deeply plugged into the global supply chain such as Singapore and Hong Kong.

Despite the dimmer economic outlook, Dr. Khor expressed optimism about the resilience of the region. This is because the region has ample policy space to boost domestic demand and bolster growth. The region is also relatively open to adopting new technologies and services to leverage the “new economy” as a source of growth. Business Process Outsourcing (BPO), for instance, has been a significant driver of the Philippine economy. Supported by communication technology advancements, the economy is now transitioning to higher-end services such as Knowledge Process Outsourcing (KPO). 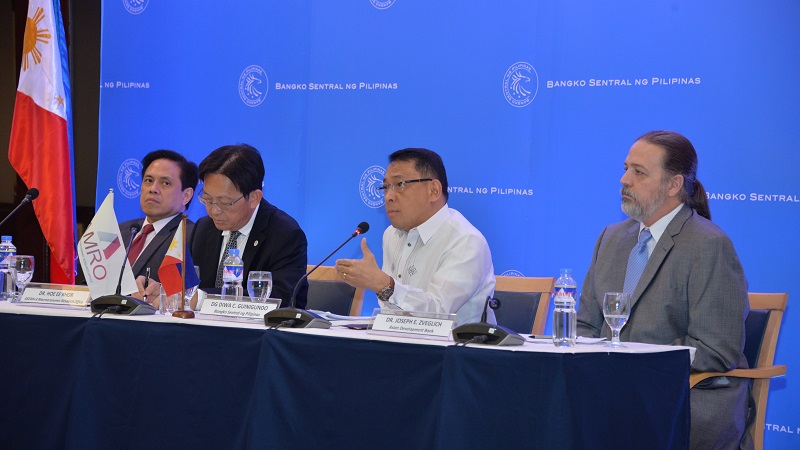 BSP Deputy Governor Mr. Diwa C. Guinigundo echoed Dr. Khor’s optimism on technology as a driver of job creation and economic growth, pointing out that the population of the Philippines is well-educated, young, and technologically savvy, which puts it in a good position to ride the wave of technological advancements. Dr. Joseph E. Zveglich, Deputy Chief Economist of the Asian Development Bank concurred, highlighting that rising internal demand can offset job displacements arising from automation. He also gives credit to human ingenuity, saying that the market will restructure jobs to complement advances in technology. To illustrate his point, he said that the job scope of bank tellers was restructured to include more value-added services upon the mainstreaming of automated teller machines (ATMs). On the same note, Mr. Rabboni Francis B. Arjonillo, President of First Metro Investment Corporation, highlighted that technological advancements create new jobs such as application development and data analytics. 21st century competencies such as personalized care as well as critical and analytical thinking are also unlikely to be displaced by technology.

To leverage the economic benefits technological advances can bring, economies should invest in both hard and soft infrastructure. The panelists discussed the roles of the government, the private sector, as well as multilateral investment banks in facilitating infrastructure development. DG Diwa highlighted the policies enacted by the Philippines government to build infrastructure and human capital, such as the “Build Build Build” initiative, as well as making healthcare and tertiary education accessible for all Filipinos. He also added that the BSP has lowered the bank’s reserve requirement ratio (RRR), which frees up more funds for infrastructure projects.

Last but not least, the panel also recognized that regional initiatives, such as the Belt and Road Initiative and the Master Plan on ASEAN Connectivity 2025, can also bridge the existing infrastructure gap. 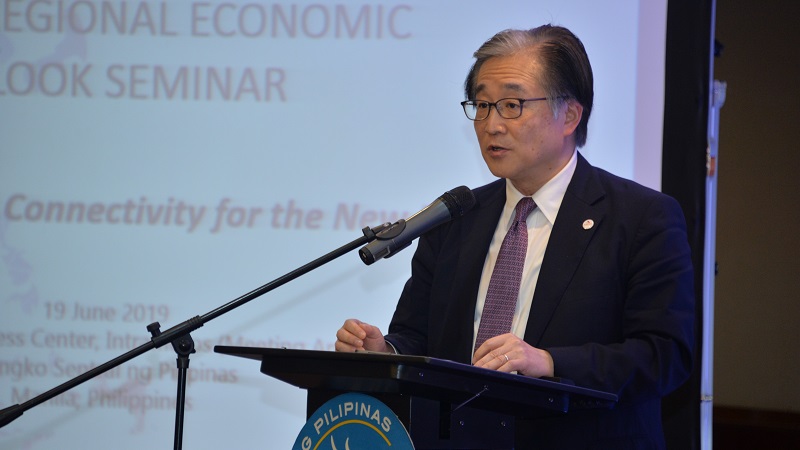 The seminar ended with closing remarks from AMRO Director Mr. Toshinori Doi. He highlighted the huge demand of the “new economy” on hard and soft infrastructure and lauded the government’s efforts in bridging the infrastructural gap.