SINGAPORE, July 25, 2018 – In the past four decades, China has undertaken major reforms, which have led to rapid growth and a strong leadership position in the international economic environment, yet several challenges remain to be tackled to ensure sustainability of the outcomes. This was highlighted by senior policymakers and academicians at a roundtable discussion on key lessons from China’s reform and opening-up, future development, and implications for ASEAN co-organized by the ASEAN+3 Macroeconomic Research Office (AMRO) and Peking University’s School of National Development on July 16. AMRO Advisory Panel member, Professor Lu Feng in Peking University, chaired the seminar. 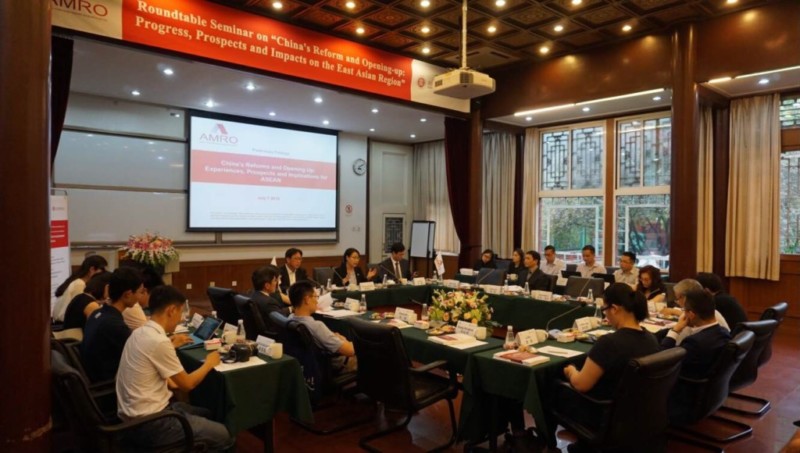 AMRO and Peking University’s School of National Development co-host a roundtable discussion on China’s reform and opening-up, future development, and implications for ASEAN.

AMRO Director, Dr Junhong Chang shared with participants of the roundtable that AMRO was conducting a study themed “China’s Reform and Opening-up: Progress, Prospects and Implications for ASEAN”. The study was one of the ongoing efforts by AMRO to strengthen its knowledge of regional economic development, integration and spillover impacts. AMRO Chief Economist Dr Hoe Ee Khor highlighted that China’s large and ever-growing size has given it a tremendous boost in multiple areas: in terms of stronger capacity to absorb shocks, sustain overall growth, and deploy resources flexibly domestically to lift growth across provinces. 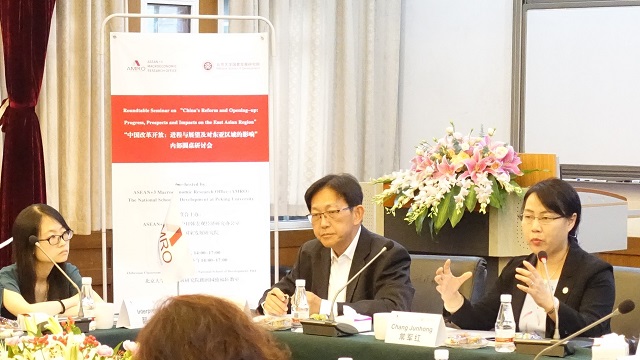 AMRO Lead Economist Dr Chaipat Poonpatpibul made a presentation based on the preliminary findings of the study. China has been comprehensive in the coverage of its reforms and gradual and pragmatic in the implementation. This approach has led to rapid growth, allowing China to catch-up and leapfrog into leadership positions in key areas of the new economy. He opined that the shift in the policy focus from speed of growth to quality of development was the right policy move in the recent years. Consumption would be the most important contributor to growth based on the demographic factors, further improvements in the social security system, and the historical profile of the consumption to GDP ratio witnessed in other export-oriented East Asian economies.

Dr Poonpatpibul also elaborated that ASEAN had benefited significantly from trade in goods and services with China, especially through the regional production network and increasing outbound Chinese tourists. The economic bloc is poised to gain more from the growing demand from the rising middle class in China, increasing cross-border direct investments, and enhanced collaboration in building platforms for the new high-tech and digital economy. Notwithstanding the large scope of mutual benefits ahead, China and ASEAN would likely compete against each other in certain areas such as advanced electronic parts and some labor-intensive goods. Besides, trade and financial spillovers from China to ASEAN and vice versa would also increase once the region becomes increasingly integrated. As a result, there is a need for enhanced economic and financial cooperation to reap benefits of greater integration and mitigate spillover impacts. 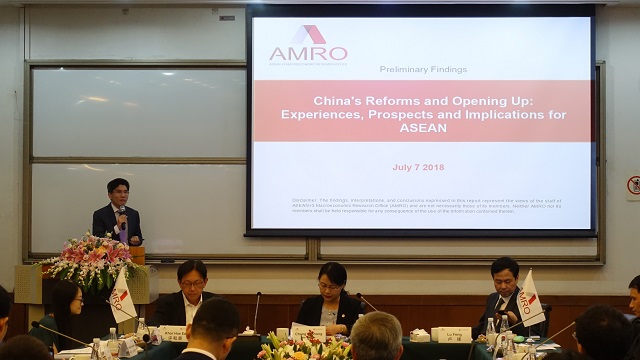 The panel of experts were generally of the view that reforms in China were in the right direction and several major reforms were driven by external crises and risks. Pushing for reforms, growth, and macro-financial stability simultaneously was a major challenge in the past. Several experts highlighted reforms of state-owned enterprises, tax and property rights as key areas that needed to be strengthened. Several critical remaining challenges on the financial side such as unbalanced and inefficient financial services, slow progress on foreign investment in the financial sector, and lack of efficient financing mechanism to serve small and medium enterprises also needed to be addressed.

Several experts noted that China and ASEAN share a common interest to grow together and benefit from each other. Regional integration would help shield the region from rising trade protectionism as well as external shocks.  A more widespread use of the Renminbi could be helpful in addressing vulnerability related to episodes of US dollar liquidity strains. The panel suggested that the region further develop its financial safety net arrangements to keep pace with the rapid progress of economic development and integration and the emerging vulnerabilities and risks.

In her concluding remarks, Dr Chang highlighted challenges facing China in the new world order, such as sustaining its strong and self-sufficient growth while maintaining its competitiveness and developing into a benevolent global power.

As part of AMRO’s 2018 China Annual Consultation Visit, this roundtable discussion provided useful inputs for AMRO staff to further develop its study. The study is expected to be released at a high-level forum themed “40th Anniversary of China’s Reform and Opening-up: Progress, Prospects and Impacts on the East Asian Region” co-organized by AMRO, the Ministry of Finance of China, and the People’s Bank of China, in Beijing on October 26, 2018.