1. The CMIM Agreement contains 24 Articles and 9 schedules. The basic objectives of this CMIM Agreement are (i) to address short-term liquidity difficulties in the region and (ii) to supplement the existing international financial arrangements.

3. The total size of CMIM is USD 120,000,000,000 (one hundred twenty billion). Individual country’s contribution, borrowing multiples and voting power are as agreed in the AFMM+3 in Bali in May 2009 and as amended in the AFMM+3 in Tashkent, Uzbekistan on 2 May 2010. The contribution to CMIM is agreed to be made through the exchange of Commitment Letter that commits to provide financial support within the amount of contribution.

4. The Central Bank of ASEAN+3 countries as well as Monetary Authority of Hong Kong, China are to swap their local currencies with the US dollar for an amount up to their contribution multiplied by their respective purchasing multiples.

5. Each drawing of liquidity support in the form of bilateral currency swap shall mature basically 90 days after the date of drawing, and can be rolled over for 7 times at the maximum (approximately 2 years).

6. Two countries will be appointed to coordinate the swap activation process when a request for drawing is made. Two Coordinating Countries shall be the two cochairs of the ASEAN+3 Finance Minister Process, one Coordinating Country from ASEAN member countries and the other from China, Japan and Korea

7. Fundamental issues (total size of CMIM, contribution of each CMIM party etc) for the CMIM would be determined by a consensus approval at Ministerial Level Decision Making Body, which consists of ASEAN+3 Finance Ministers. Executive level issues (initial execution of drawing, renewal of drawing, events of default) would be determined by 2/3 majority at Executive Level Decision Making Body (ELDMB), which comprises the deputy-level representatives of ASEAN+3 Finance Ministries and Central Banks and Monetary Authority of Hong Kong, China.

8. A CMIM party which requests for drawing has to meet conditions before the voting for a swap request; such as completion of review of the economic and financial situation and no events of default. As well, each CMIM party is requested to comply with covenants such as submission of the periodic surveillance report and participation in the ASEAN+3 Economic Review and Policy Dialogue.

9. In principle, each of the CMIM parties may only escape from contributing to a swap request by obtaining an approval of Executive Level Decision Making Body. In exceptional cases such as an extraordinary event or instance of force majours and domestic legal limitations, escape is possible without obtaining ELDMB approval.

10. The CMIM parties shall jointly carry out a basic review of the CMIM Arrangement and the key terms and conditions of the CMIM every 5 years. Also, ad-hoc reviews may be conducted when necessary 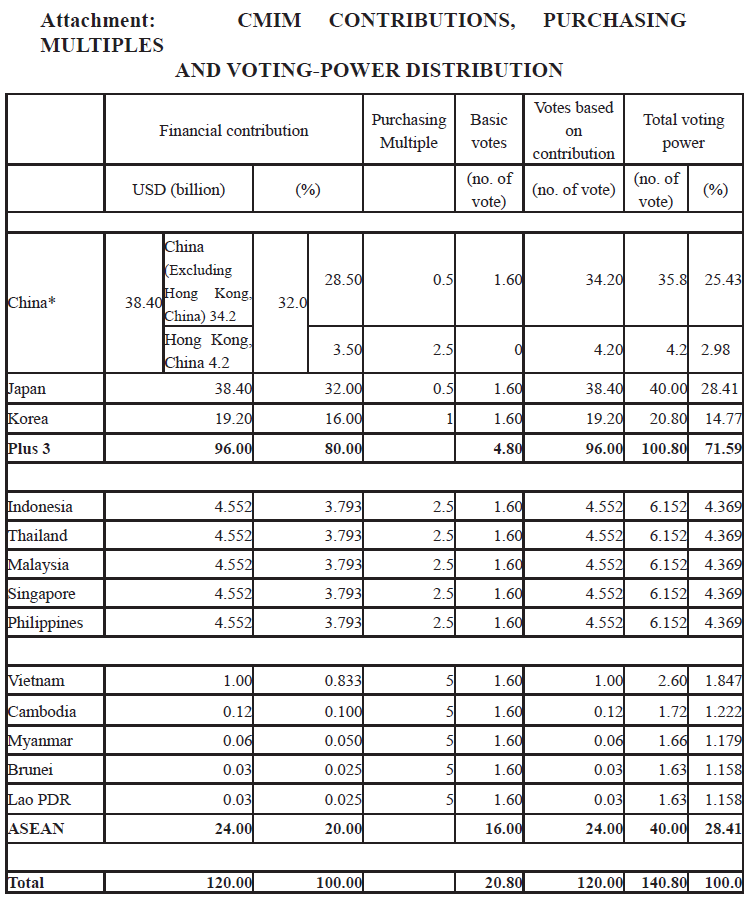 Key Points for Strengthening the CMIM