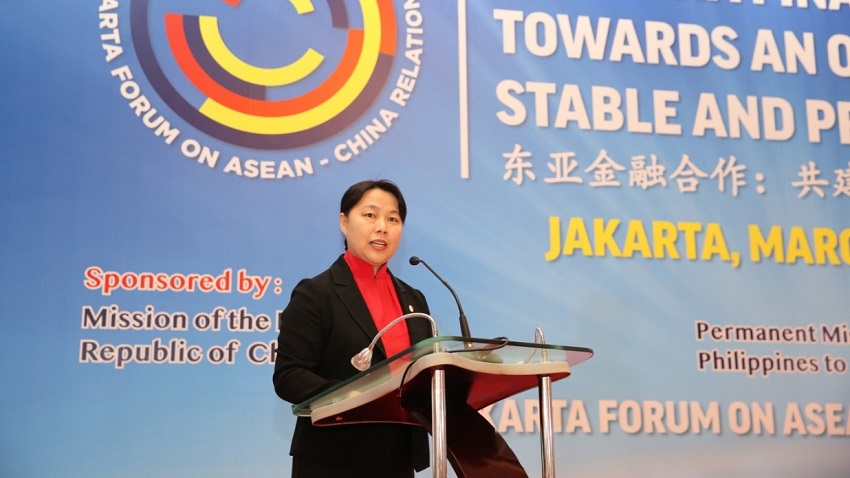 Her Excellency Elizabeth P. Buensuceso, Permanent Representative of the Philippines to ASEAN,

I am honored to have this opportunity to address all of you today, and I want to thank the co-sponsors, the Permanent Mission of the Philippines to ASEAN and the Chinese Mission to ASEAN, for organizing and for so kindly inviting me to this very first Jakarta Forum on ASEAN-China Relations. I believe this forum will support regional integration significantly by providing a meaningful platform to exchange information and views on East Asian cooperation and relevant regional and international issues.

The initiation of this forum is an important milestone, especially on the occasion of the 20th anniversary of the ASEAN+3 cooperation process, that will act as a springboard for advancing East Asia’s cooperation to the next level. I would also like to commend the co-sponsors for their vision in choosing “financial cooperation” as the theme of this inaugural event. To me, this demonstrates regional commitment to advancing an indispensable requirement for greater regional growth, stability and integration. As Director of AMRO, the regional macroeconomic surveillance organization in the ASEAN+3 region established eight years ago comprising the ten ASEAN countries plus China (including Hong Kong), Japan, and Korea, I would like to share some thoughts on East Asian cooperation – the achievements we have attained so far, and the challenges ahead.

First, East Asian cooperation has come a long way. We have benefited greatly from Asian regionalism, originally driven by market forces and increasingly supported by regional trade agreements and other forms of cooperation. We have seen the establishment of ASEAN and the ASEAN Economic Community, alongside other frameworks of cooperation such as the ASEAN+1, ASEAN+3 and the ASEAN+6 (or the East Asia Summit, EAS). The EAS in particular, has become a key platform for dialogue and cooperation. ASEAN has been the driving force behind the various cooperation mechanisms, such as the Regional Comprehensive Economic Partnership (RCEP), which could pave the way for the establishment of the East Asia Economic Community.

Second, economic and financial integration in East Asia is increasingly gaining traction. East Asia remains the fastest growing region in the world, with an average annual growth rate of 5 percent since the 2008 Global Financial Crisis (GFC). The journey has been characterised by deepening intra-regional links and a growing sense of regionalism and community. Intra-regional trade continues to expand, reaching 50 percent in 2017, from almost 40 percent in 1990. This is amongst the highest, surpassing those of North America and the European Union intra-regional trade. Rapid urbanisation and a growing middle class have boosted regional demand. The latest OECD data shows that final demand within the region accounted for 45 percent of the region’s total value added exports in 2015, up from 35 percent in 2011. This makes the region much less dependent on final demand from outside the region to power its growth. On the financial side, considering the large investment needs, intra-regional inward foreign direct investment (FDI) flows also continue their upward trend, registering an average annual growth rate of 8.5 percent since 2010. In particular, for Cambodia, Lao PDR, Myanmar, and Vietnam, or the CLMV countries, such investment accounts for about two-third of all investments into those countries.

Third, despite these achievements, there are still gaps in the journey towards safeguarding financial stability and longer term economic prosperity in the region:

This brings me to my fourth point, the fragmentation of the cooperation framework. At this moment, there is a lack of clearly defined and agreed set of common strategic visions and roadmaps in East Asia, and therefore an apparent lack of direction in terms of key milestones and deliverables achieved.

In the area of financial cooperation, let me highlight several observations.

It is my strong belief that East Asia must – and will – continue to uphold multilateralism, while seizing this opportunity to further accelerate regional economic and financial cooperation in promoting further shared prosperity.