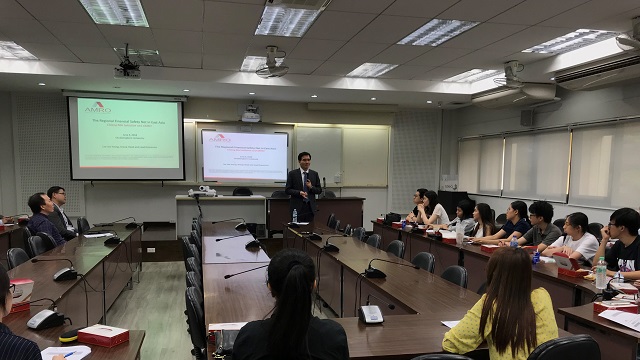 Last month, I was honored to talk with students and professors at Chulalongkorn University in Bangkok about sustaining macroeconomic and financial stability in East Asia and the role of the regional financial safety net.

As many of us can recall, about 20 years ago, Thailand was the epicenter of the Asian Financial Crisis (AFC), or the Tom Yum Goong Crisis as it was referred to in the country. In the aftermath of the AFC, countries in the East Asian region came together to form a regional financing arrangement called the Chiang Mai Initiative (CMI) at a meeting in 1999 in Chiang Mai, a city in mountainous northern Thailand. Started out as a network of bilateral swaps, in 2010, the CMI was involved into a single contractual agreement called the Chiang Mai Initiative Multilateralisation (CMIM), a multilateral currency swap arrangement among 10 members of ASEAN, China (including Hong Kong), Japan, and Korea. Subsequently, the ASEAN+3 Macroeconomic Research Office (AMRO) was set up in 2011 to conduct macroeconomic surveillance and support the implementation of the CMIM. With the total size of USD 240 billion, the CMIM aims to address balance of payments and/or short-term liquidity difficulties in East Asia and to supplement the existing international financial arrangements.

With all facts above, one would expect that people in Thailand would be quite familiar with this initiative as it was rooted in their home country. However, to my surprise, in response to a survey I did before the lecture, just a few of the professors and students had had a rough idea of the CMIM, and no one had heard of AMRO.

To share more of the survey results, as for the question on consequences of the bailout program by the International Monetary Fund (IMF) during the AFC, most of the participants were generally positive about it and replied that it was an inevitable second-best choice to avoid defaulting on debts and further economic turmoil during the crisis. Regarding the current economic situation, most of them were concerned about Thailand’s vulnerabilities to external shocks, even though they believed that the economic fundamentals have become stronger today than before.

In their informed responses to the survey after the lecture, when asked for desirable options to deal with any financial crisis in the future, half of the participants were in favour of the option of using the CMIM facility alone while the other half supported the option of an IMF program supplemented by the CMIM. With regard to the future of the CMIM and AMRO, the majority of the participants supported to develop a fund-type facility by combining the CMIM and AMRO. 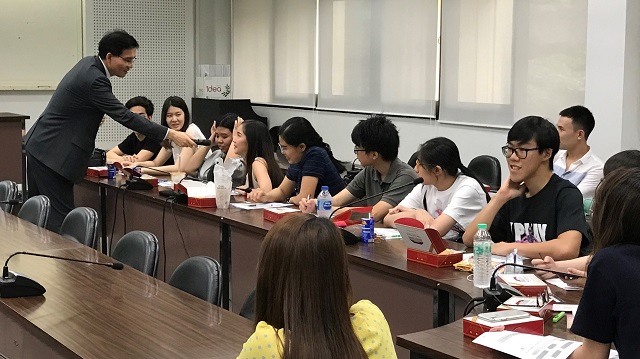 Regional Financing Arrangements (RFAs) like the CMIM are probably the least known among the tools the world has at its disposal to tackle a financial crisis, but they are taking on an increasingly important role. RFAs are a robust layer of protection within the so-called Global Financial Safety Net (GFSN), whose other components are national foreign exchange reserves, bilateral swap arrangements between central banks, and, last but not least, the IMF.

While the RFAs have made great strides in the global stage in recent years, public awareness and recognition about them remains limited. Although the survey results left much to be desired as the CMIM/AMRO was little known among academics and students in Bangkok, it was encouraging to know that they were generally positive and supportive about the future of a strengthened RFA in East Asia.

Apart from my personal feelings, enhancing the public’s understanding of the CMIM and AMRO is crucial in a couple of aspects.

First, the public’s understanding and support for the RFA is the driving force behind the development of CMIM and AMRO in the region. The importance of the RFAs has widened its awareness through several economic crises in the past. Just as we had better fix the roof before it rains, we need to strengthen the RFA before any crisis in the future comes. The public’s support among the member economies is crucial in strengthening the CMIM and AMRO when the economic conditions allow the members to prepare for the rainy days.

Second, the public’s understanding of the RFA is also essential to the success of the actual bailout program in times of crisis. No matter how good financial supports are provided through the CMIM, if the market and the public do not understand it correctly and trust it, market confidence, the most critical element in overcoming the crisis, cannot be restored and strengthened.

In our globalized economy, financial crises are a hardy perennial. It looks just hard to predict when and where they would occur. Raising public awareness and support for the RFA is critical to strengthen the RFA and get prepared for the next crisis.

In the past few years, Senior Management and staff at AMRO, including myself, have stepped up our efforts to introduce the CMIM/AMRO to the public and listen to their feedback to enhance our work. We are committed to continuing our public engagement to develop shared understanding and support to regional macroeconomic and financial stability. All of you are invited to join us in this journey!