Reformed and Resilient Asia 20 Years after the Asian Financial Crisis

Reformed and Resilient Asia 20 Years after the Asian Financial Crisis 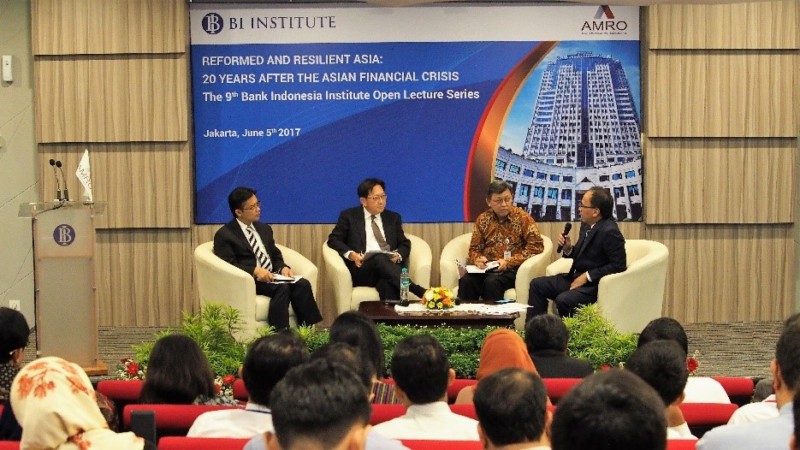 JAKARTA, INDONESIA, June 5, 2017 – Two decades after the Asian Financial Crisis (AFC), the ASEAN+3 region has become more resilient but it is once again tested with new global uncertainties, as highlighted by experts at a seminar co-organized by the ASEAN+3 Macroeconomic Research Office (AMRO) and Bank Indonesia Institute on June 5, 2017, in Jakarta, Indonesia.

Attended by 110 economists and analysts from both public and private sectors, the seminar discussed issues covered in the ASEAN+3 Regional Economic Outlook (AREO) 2017 released by AMRO in early May in Yokohama, Japan. As AMRO’s annual regional surveillance publication, the AREO 2017 assesses the regional economic outlook and financial stability in 10 ASEAN countries, and China (including Hong Kong), Japan, and Korea. In this inaugural edition, the report also includes a thematic study of the region 20 years after the Asian Financial Crisis (AFC).

In his presentation, Dr Khor highlighted that the regional growth is expected to be sustained at about 5% in 2017-18. The near term outlook for the region has turned somewhat brighter, although risks are tilted to the downside, from tightening global financial conditions, trade protectionism and global policy uncertainties. Growth of the two largest economies in the region, China and Japan, remains stable and robust, and will to anchor the continuing growth in the region. 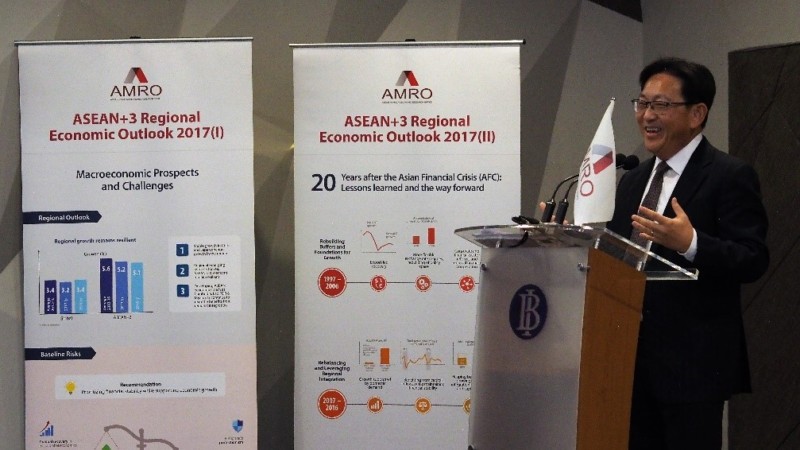 Emerging market economies in the region, including Indonesia, have seen largely stable financial markets with the resumption of capital inflows since early 2017. The panelists agreed, however, that policy space has narrowed with downside risks from global policy uncertainties, and it would be prudent for policymakers to prioritize financial stability over faster economic growth, so as to achieve a more sustainable economic growth and development in the long run.

The AFC is a landmark event in the ASEAN+3 region that has shaped the subsequent foundations and trajectory of economic growth and regional integration, as well as policymakers’ perspectives on crisis management and resolution. In particular, the AFC provided the impetus to ASEAN+3 members to come together to develop a regional safety net supported by enhanced macroeconomic surveillance.

Indonesia was one of the economies that was hardest-hit by contagion during the AFC, but in the 20 years since, policymakers have undertaken significant reforms to rebuild the economic fundamentals in order to revive growth and strengthen the resilience of the economy to shocks. These include financial sector and corporate governance reforms, fiscal consolidation, and a more flexible monetary policy framework.

The panel discussed the opportunities and challenges to sustaining the growth trajectory in Indonesia and in the region in future, with rebalancing from export-led to domestic demand-driven growth. Although there are challenges from the changing global economic landscape and ageing populations, there are still be efficiency gains from automation and the new digital technology, and from further infrastructure investment fostered through greater regional trade and investment linkages.