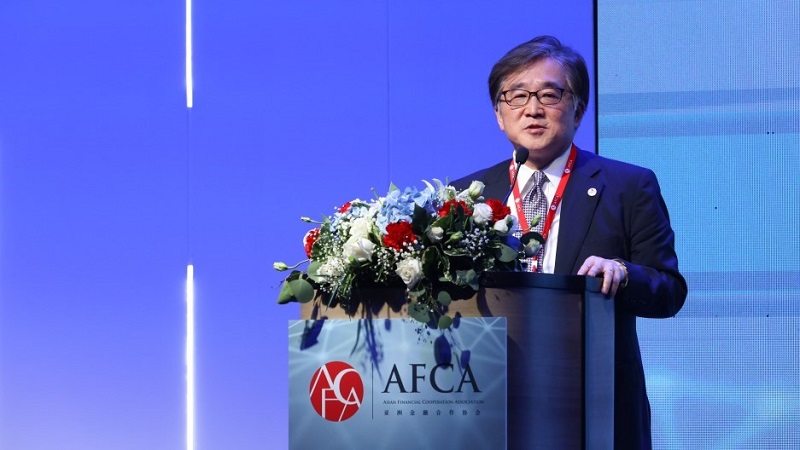 First of all, I would like to thank the Asian Financial Cooperation Association for the opportunity to share our views on regional economic and financial integration at the 2019 Financial Summit Forum.

Before I start to address this important topic, please allow me to make a brief introduction of the ASEAN+3 Macroeconomic Research Office, or AMRO, the institution that I have had the privilege to lead since May this year. AMRO is a regional macroeconomic surveillance organization that aims to contribute to securing macroeconomic and financial stability in the ASEAN+3 region, which include 10 nations of the Association of Southeast Asian Nations and China (including Hong Kong), Japan, and Korea. To fulfill its mandate, AMRO focuses on three core functions: conducting macroeconomic surveillance for its members, supporting the implementation of the Chiang Mai Initiative Multilateralisation (CMIM), and providing technical assistance to members. With the size of USD240 billion, the CMIM is a multilateral currency swap arrangement among ASEAN+3 member. Its core objectives are to address balance of payment and short-term liquidity difficulties in the region, and supplement existing international financial arrangements.

Now, let me touch upon the regional economic development. ASEAN+3 has been one of the fastest growing region. Growth has sustained at more than 5 percent in the past decade, which is much higher than the global average of 3 percent.

At the same time, the region has become increasingly integrated, characterised by strengthening intra-regional links, a growing sense of regionalism and community, and increasing regional demand. To assess the regional integration progress, we have to look at two major aspects: trade and investments.

ASEAN+3’s intra-regional trade has been steadily increasing after the Asian Financial Crisis and now stands at around 47 percent of the region’s total share of trade, which is comparable to that of the Eurozone. Trade linkages in ASEAN+3 are as integrated as in Euro countries. Economies in ASEAN+3 region are vastly different in terms of development stages so the idea of a single currency is premature, but in terms of economic integration, it is on par with the Eurozone.

Regional rapid economic growth brought about rapid urbanization and a growing middle class, which have boosted regional demand. East Asian economies are exporting more within the region for final consumption and investment in the region. According to OECD data, demand from within the region accounted for 45 percent of total value-added exports in 2015, up from 35 percent in 2011. Given the rapid growth, it is possible that this already exceeded 50 percent.

The region is now much less dependent on final demand outside the region.

The same trend also holds true with portfolio investment. If we look at the total cross-border holdings of assets by ASEAN+3 economies, it amounted to around USD982 billion at the end of 2016, having expanded more than ten-folds since 2001. By source, Hong Kong and Singapore accounted for the bulk of investment as they are the financial hubs in the region, but investment from China, Japan, and Korea have also been increasing steadily. The increase of share of intra-regional portfolio investment from less than 5 percent in early 2000s to around 15 percent in 2016 reflects strengthening of financial integration.

The above evidence shows that economic and financial integration in the ASEAN+3 region has been deepening significantly over the past 20 years.

However, the region is facing several challenges which can have a significant impact on its growth and financial stability.

The first major risk this region faces is the intensification of the trade tension between the U.S. and China. There are three channels that impact the economies in the region, namely: (1) Export of China; (2) Impact through the GVC; and (3) Loss of business and consumer confidence due to increased uncertainties.

China’s exports to the US started to decline from 2018 for products subject to increased tariff, and other products also began to decline from earlier this year. The order of decline is between 20 to 40 percent, depending on the products.

The impact through the GVC is also significant. A large part of Chinese exports to the US the value added comes from outside China. In particular, China sources more than half of the value-added in electronics and one-quarter of the value-added in machinery exports to U.S. from overseas, including from the region. Regional economies that are deeply integrated to the world economy through the GVC, such as Hong Kong, Singapore, and Korea, are hardest hit, while Thailand and Malaysia are also impacted through GVC and their exposure to China.

Given this heightened risk, AMRO revised our baseline growth projections downward to 4.9 percent and 4.7 percent for 2019 and 2020, down from 5.1 percent and 5.0 percent, respectively, mostly due to declining export and manufacturing activities due to increased trade tensions.

Another major risk to regional growth is a sharp slowdown in G3 economies, which comprise the U.S., the Eurozone, and Japan. The impact from the fiscal stimulus is dissipating in the U.S., clouding its growth prospects, while the recent consumption tax increase in Japan could trigger a sharp deceleration in the Japanese economy.

A sharper-than-expected slowdown in China is considered a tail risk. The recent slowdown in China is in part a response to the authorities’ policy of deleveraging, therefore, it is a welcome development. But given a build-up of corporate debt in China, we cannot rule out a sharp slowdown. There now seems to be a consensus view that growth for the next year could be lower than 6%, but we are of the view that there is also a risk to the upside. China has stated its target of doubling the GDP in 10 years and 2020 is the last year in the period. With growth falling under 6 percent, it might not be able to achieve that target, therefore, it is possible that the government would want to stimulate the economy to boost  growth up to above 6 percent, which will help achieve the 10-year target. If materialized, this would have a positive spillover effect to the region in the short-run, but over time, this could develop into a source for more serious problems.

Another major risk is the large swing in asset prices and capital flows due to shift in monetary policies of major economies. In 2018, when the Fed’s policy was on the tightening bias, it imposed major pressure on capital flows in the region, leading to significant policy challenges for regional economies. Now that the Fed has started to ease again, we are seeing significant capital inflow into the region, posing another set of challenges. Political stability, high growth and positive interest rates make this region very attractive for investors. Authorities are coping with this challenge using pragmatic policy mix including active use of macroprudential policy measures and capital flow management measures where necessary. Now, while the IMF takes a rather cautious view on the use of this policy mix, we at AMRO see this as a policy innovation and believe that it is contributing to financial stability in the region.

So what should policy makers do given these risks?

First, countries should use monetary and fiscal policy flexibly to ensure that they do not fall into recession. We have already seen many central banks in the region cutting their policy rates, including the Bank of Thailand. Economies with ample fiscal space such as Korea, Hong Kong, and Thailand also compiled fiscal stimulus packages to counter the downturn.

Second, the region should enhance efforts to further integrate, making it less dependent on extra-regional demand. In this regard, the ratification of the Comprehensive and Progressive Agreement for Trans-Pacific Partnership (CPTPP) and the early conclusion of the negotiations on the Regional Comprehensive Economic Partnership (RCEP) will be beneficial.

Third, to cope with rapid changes in capital flows, strengthening of the regional financial safety net is critical. ASEAN+3 members have been working towards enhancing the operational readiness of CMIM and strengthening AMRO’s capacity as well as conducting joint test runs with the IMF to ensure smooth and effective collaboration during crisis time.

To sum up, economies in the ASEAN+3 region remains resilient and are very well placed for medium to long-term growth. Although facing several external headwinds, regional economies have enough monetary and fiscal policy space to address these challenges. Their continued use of smart policy mix will ensure both financial stability and economic growth. To further fortify regional economy, a strong regional financial safety net is essential and we should continue working towards this direction to ensure that the region is fully prepared when the next shock from rapid capital outflow hits the region.