The 3rd Joint Regional Financing Arrangement (RFA) Research Seminar co-organized by the ASEAN+3 Macroeconomic Research Office (AMRO), the European Stability Mechanism (ESM), and the Fondo Latinoamericano de Reservas (FLAR), will be held on May 16 and 17, 2019 in Luxembourg. The seminar is an annual event aiming at bringing academics and institutions together to discuss key issues pertaining to global and regional financial stability.

Given heightened global risks related to trade tensions, geopolitical challenges, and economic and market uncertainties, this year our research seminar will focus on detecting, analysing, preventing, and tackling sovereign risks and how the Global Financial Safety Net, in particular its regional line of defence, can provide enhanced support.

The audience will be a mix of academics, economists from central banks and finance ministries, representatives from RFAs, the IMF, and other institutions.

The event is by invitation only.

It is my honor to have the opportunity to reflect on what we have discussed in the past two days. We have covered a wide range of pertinent issues, including risk detection, focusing on some critical factors from the past European crises, risk transmitting mechanisms to emerging markets and sovereign default issues, as well as risk detection tools developed by the International Monetary Fund (IMF), the European Central Bank (ECB) and the ASEAN+3 Macroeconomic Office (AMRO). We also had a lively discussion on what Regional Financing Arrangements (RFAs) can do to prevent the next crisis.

My closing remarks will touch on where we stand in terms of development of the RFAs and how we can move forward in addressing possible future financial crises and securing financial stability regionally and globally.

The global economy is undergoing profound changes and facing increasing uncertainties that need to be carefully managed.

According to AMRO’s calculation, the overall volume of RFAs currently amounts to USD 1,553 billion, which is even larger than resources of the International Monetary Fund (IMF) at USD 1,357 billion. More significantly, the delayed discussion of the IMF quota increase would signify the policy shift to inward-looking direction by major economies.

The current trade war between the U.S. and China signals that the U.S. has withdrawn itself from the position as the guardian of the international trade system. It is likely that we will witness similar shifts in the U.S. policy on international finance, especially in terms of IMF funding and financing. If the leading countries are no longer willing to shoulder responsibility and assume leadership in tackling financial crises, other countries would have to rely more on self-help measures, including RFAs.

RFAs’ effectiveness and the level of coordination with other layers of the GFSN are still revealing room for improvement, and in some cases, untested.

The G20 Eminent Persons Group report released in 2018 conveys a similar message. The shortcomings of current RFAs identified by the report are two-fold:

Policymakers in the ASEAN+3 region are fully aware of these challenges. Given the legacy of the so-called “IMF stigma” in the region, CMIM parties need to strike a balance between improving CMIM as an independent facility and at the same time, enhancing coordination with the IMF. During the past years, the members, with support from AMRO have worked intensively on these tasks. Let me briefly share our experience.

Our peer RFAs are also making similar efforts. For example, the ESM is undergoing reforms that encompass extended surveillance, crisis management, and a broader scope of financing in times of need. FLAR is also enhancing its structure and capacity. The European Fund for Stabilization and Development (EFSD) is moving towards enhancing its institutional arrangement.

In the exercise of upgrading RFAs, I strongly believe that we can learn from each other’s experience. For instance, when designing CMIM’s coordination process with the IMF, we took the experience of IMF co-financing by the Eurozone’s RFAs as benchmarks. We also hope that the ongoing efforts to enhance CMIM can be an inspiration for other RFAs to look into when upgrading theirs.

In this regard, this joint RFAs seminar is a very useful platform for us to exchange experiences and learn from each other. It would also be beneficial to promote effective communication and knowledge sharing. In this regard, the idea of establishing a virtual-knowledge hub, in addition to the current joint secretariat function, which all RFAs can access and share their knowledge might be worth exploring.

To conclude, I would like to thank ESM colleagues for your warm hospitality and excellent arrangement of the event, especially for hosting the event in this beautiful castle, which was built in the 11th century and has since then survived several wars. We would like to follow the history of this castle to defend our own region from external risks and the next crisis.  Thank you all for your active participation. We look forward to seeing all of you at the 4th RFA Research Seminar next year.

Luxembourg, May 16, 2019 –  The regional rescue funds will discuss, at their 3rd Joint Research Seminar in Luxembourg, how to detect, analyse, prevent and tackle sovereign risk and how they can provide enhanced support, given the heightened global risks related to trade tensions, geopolitical challenges and economic and market uncertainties.

“Academic research into the reasons behind financial crises and the efficacy of our policy tools plays an essential role in preparing us for potential crises going forward. This year, for the first time, technical experts from all seven major RFAs were able to be present, a clear recognition of the relevance and success of the two previous seminars,” said Klaus Regling, Managing Director at the ESM.

For the 3rd Joint RFA Research Seminar, organizers reached out to academics and researchers to have the latest studies available to enrich the discussion. The participants’ discussions will focus on current sovereign risks, highlighting banking sector issues, long-term fiscal costs, financial stress in lender countries and capital outflows from emerging market countries.

“Currently, the world is more indebted than a decade ago, both in the private as well as in the public realms. Although emerging and developing economies show a lower indebtedness than developed economies, their debt has been growing over the past 10 years and its cost is higher than it is for advanced economies. This demands a close surveillance of the economies,” pointed out José Darío Uribe, Executive President of FLAR.

The International Monetary Fund, the European Central Bank and AMRO will present their models and indicators to help detect sovereign risks, contributing to the discussion on how institutions could get better prepared with various early warning systems. Finally, participants will debate how to prepare the Global Financial Safety Net to detect risks early and fight the next crisis, and how to adjust policy to improve the effectiveness of defence mechanisms.

“Strong coordination is required among all players of the international financial system to prepare for the next crisis that could hit us. This research seminar is an important avenue to discuss issues that are crucial to strengthen each RFA’s capacity as well as the coordination among different layers of the Global Financial Safety Net,” said Yasuto Watanabe, Deputy Director of AMRO.

In addition to AMRO, as the macroeconomic surveillance arm of the Chiang Mai Initiative Multilateralisation, FLAR and the ESM, the other RFAs present at the seminar are the Arab Monetary Fund (AMF), the BRICS Contingent Reserve Arrangement (BRICS CRA) represented by the Central Bank of Brazil, the Eurasian Fund for Stabilization and Development (EFSD), the European Commission, through the EU Balance of Payments Facility. The IMF and the Bank for International Settlement, which both support global financial stability, also participated.

In addition to this technical-level gathering, the heads of RFAs and representatives of the IMF meet once a year at the High-level RFA policy dialogue to discuss the collaboration between the IMF and RFAs and among RFAs themselves. The 4th RFA High-Level Dialogue will convene on 16 October 2019 in Washington, D.C., on the sidelines of the IMF/World Bank Annual Meetings.

Participants include a mix of academics, economists from central banks and finance ministries, representatives from RFAs, the IMF, and other institutions. 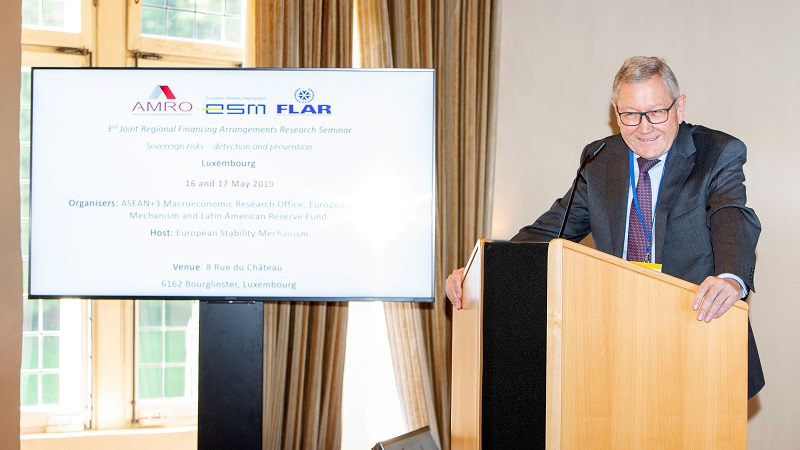 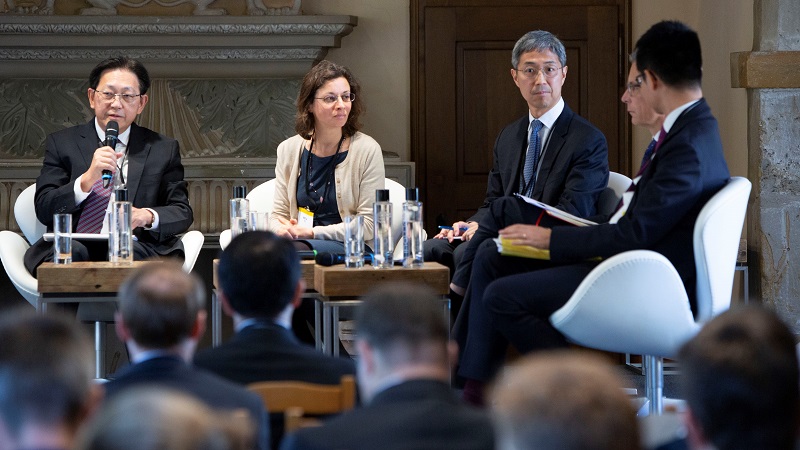 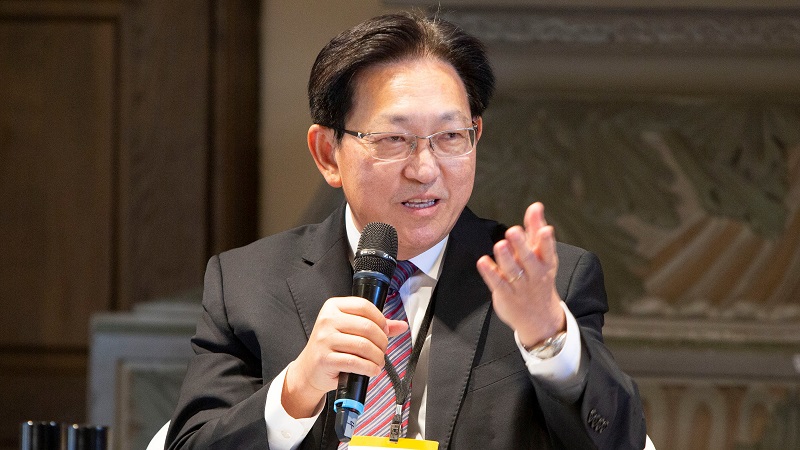 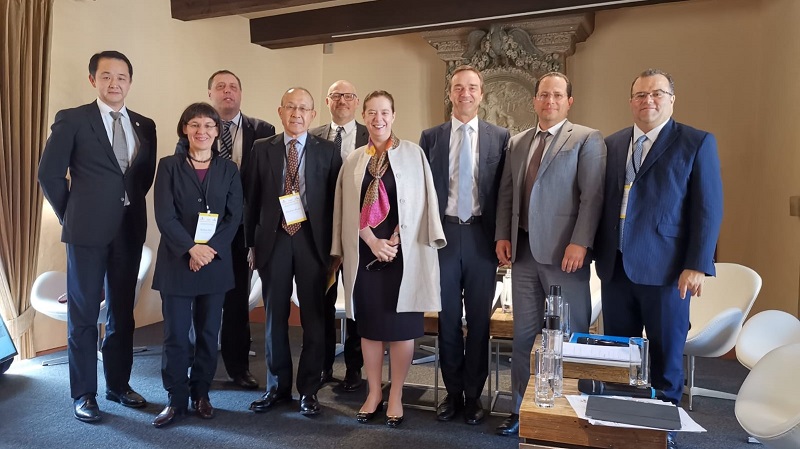 AMRO Deputy Director, Mr Yasuto Watanabe (first from left), attends the 3rd RFA held in Luxembourg from 16-17 May, and gives the closing remarks for the event.