Blessed with an abundance of natural resources, Lao PDR’s energy and mining sectors are among the key pillars of the country’s economic development.

To realize this potential, the country needs to enhance its policy framework and implementation capacity to tackle structural challenges faced by this sector.

The mining sector continued its robust expansion until 2012, supported by large inflows of FDI. From 2003 to 2012, FDI into the sector amounted to USD5.3 billion, or almost 30 percent of total FDI inflow into the country.

However, as global commodity prices slumped after 2012, the production of major mines shrank and the contribution of the mining sector declined. In 2018, the mining sector accounted for only 6 percent of GDP and 28 percent of exports, compared to 16 percent and 43 percent in 2012 (Figure 1). 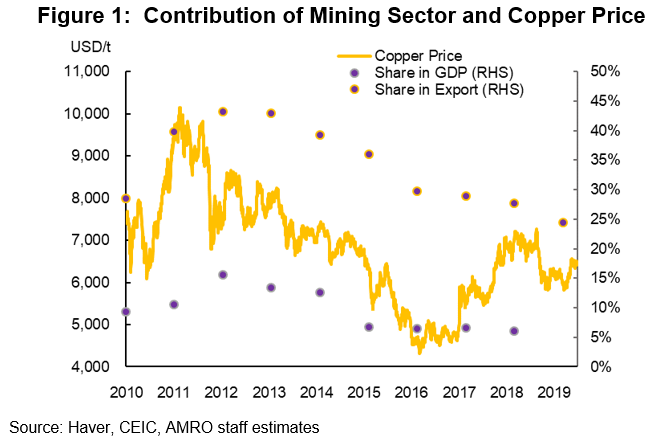 In the past decade, the share of the electricity sector in the country’s GDP increased to 11 percent from 4 percent, while its share in total exports grew fourfold to 22 percent (Figure 2). The fast-growing hydropower sector augured well for the economy as it shifted toward greater sustainability brought about by a renewable resource. Challenges faced by the resources sector

Declining output amid a slump in global commodity prices, coupled with the country’s weak regulatory environment and limited management capacity posed structural challenges to Lao DPR’s mining sector. In particular, weak management of concessions led to stalled projects and the extended period of moratorium on new concessions, hampering the recovery of the sector.

In addition, the regulation on value-added exports requiring miners to process the ore within the country before export discouraged FDI inflows into the mining sector. This regulation substantially increased the amount of required investment for additional refining facilities, which many mining companies are not comfortable with.

In the electricity sector, one of the key challenges is the overcapacity in the domestic market. With several projects still under construction, total installed capacity is projected to reach 12,632 MW by 2022, marking a 30 percent increase from 2019. About 70% percent of the new generation capacity is expected to serve the domestic market. However, the domestic tariff rates are on average lower than the costs of generation, and the growth of domestic electricity demand has been much slower than projected. As a result, the Électricité du Laos (EDL), the state corporation that manages the country’s electricity generation and distribution, has been operating at a loss, domestically.

The Lao authorities have been introducing reform initiatives to support its struggling energy and mining sector.

In the mining sector, the government has suspended new concessions and is evaluating the performance of existing mining projects and tightening the selection procedures for future projects and potential concessions. The Lao Mining Development State Enterprise (LMDSE) was established to promote the development of mining projects that are aligned with the country’s goals and objectives.

In the power sector, the government is initiating a comprehensive plan to improve the financial situation of the EDL which continues to make losses. The efforts include enhancing management, streamlining expenses, and selling assets to reduce its losses.

AMRO’s 2020 Annual Consultation Report on Lao PDR points out that despite the government’s recent reform initiatives, the problems in the resources sector run deep and need more fundamental and bold measures to unlock its full potential.

The mining sector has the potential to develop further as the country is abundant in mineral resources such as bauxite, copper, and gold. However, the regulatory framework and the management capacity have to be improved considerably to maximize the long-term economic benefits of these non-renewable resources.

In the electricity sector, the government should take bold measures to improve the financial viability of the EDL. The domestic tariff rate needs to be rationalized to cover the unit cost of production. Considering that the electricity tariff is lower than in other ASEAN economies, increasing exports to neighboring countries at a higher tariff is another option. To ensure the long-term sustainability of the electricity sector, the tariff needs to be set at a level that allows EDL to cover operational costs as well as recoup the capital investment for transmission lines used for exporting electricity.

Most importantly, the country should formulate a long-term plan to develop its abundant natural resources effectively and leverage them efficiently to develop other sectors of the economy, leading to economic diversification and greater resilience.

Going forward, once the concession period for tax exemptions expires and revenue increases, gradually building up fiscal reserves from resource revenues will become relevant for Lao DPR, to mitigate the macroeconomic impact of resource sector volatility and promote long-term socio-economic development.  Ultimately, the effective transformation of natural endowment into physical, social, and human capital is the key to securing the future of its coming generations.