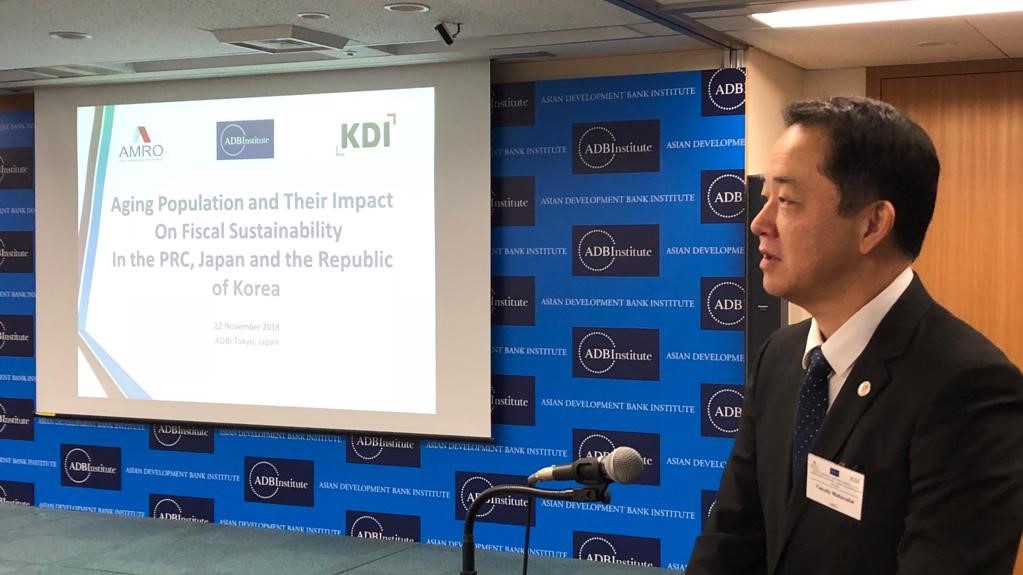 High-level Policy Forum: Aging Populations and their Impact on Fiscal Sustainability in the People’s Republic of China, Japan, and the Republic of Korea

It is a great honour for me to welcome all of you to this year’s High Level Policy Forum, co-hosted by AMRO, ADBI and KDI. The theme of this year’s forum is Aging Populations and their Impact on Fiscal Sustainability in the People’s Republic of China, Japan, and the Republic of Korea.

Population aging seems to have become a wide spread topic of global interests. By 2050, the world’s population aged 60 years and older is expected to reach about 2 billion, more than doubling from 900 million in 2015. In the past, Japan was the prime example of all population aging issues and even a widely used metaphor ‘grey tsunami’ was coined with Japanese word. Now, however, population aging issues are beyond a group of specific countries. In fact, fairly large number of countries are experiencing certain types of demographic changes, in particular aging population. Statistics show that Korea and then the People’s Republic of China have been following Japan’s trail, expecting similar problems in the future. In addition, some developing economies in the region are catching up fast, in particular Thailand and Vietnam.

For individuals, aging is a natural course of life. However, when it comes to a society, population aging is not necessarily a natural process and presents many challenging issues that require a set of well calibrated policy responses. In today’s forum, session 1 and session 2 will discuss the experiences of three countries, in two broad aspects where population aging matters most significantly-macroeconomic impacts and fiscal sustainability. From the macroeconomic perspective, aging population implies a qualitative, and possibly quantitative as well, transformation of economic agents within the economy, which can bring fundamental changes in the mechanics of economy. On the fiscal side, these fundamental economic changes will have a massive impact on the long-term fiscal sustainability. In particular, the impact on social security system needs to be carefully examined and relevant proactive policy efforts will be critical.

Session 3 will discuss the cases of Emerging Asian Economies. Although facing the same, daunting population aging problems, developing countries can have different causes, issues, and policy considerations. In particular, given that population aging problem is not a short-term issue, developing economies are experiencing population aging in a more dynamic setting than advanced economies. Their dynamic economic and institutional environments can tweak the policy issues into another dimension, which substantially complicate the problems.

In a simple form, demographic dynamics are determined by a few main components-birth, death, immigration and emigration. However, multiple factors can affect these components and different countries may have different set of factors determining their population dynamics. Therefore, more tailored approach is required in policy design, especially when the diverse economic and policy environments are considered. In session 4, we will have a roundtable discussion to exchange ideas on these policy issues.

Population aging poses many hard-to-tackle challenges and is one of the key issues to be discussed at the upcoming G20 meeting in Japan. In this regard, this High Level Policy Forum is very timely and can be an important platform to have an in-depth discussion and share different views and experiences in this region. For all of us, ‘longevity and health’ are something to celebrate at an individual level. I wish we can make some important steps toward such optimism at a society level as well.

Event Page: Aging Populations and their Impact on Fiscal Sustainability in the People’s Republic of China, Japan, and the Republic of Korea