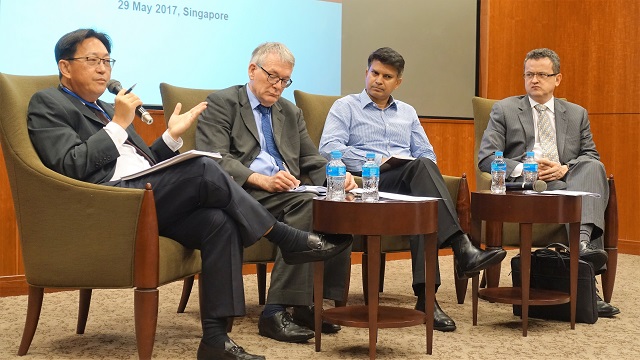 SINGAPORE, May 29, 2017 – The ASEAN+3 region continues to outperform the global growth, but downside risks should be carefully monitored, highlighted by experts at a seminar on the regional economic outlook 2017 organized by the ASEAN+3 Macroeconomic Research Office (AMRO) on May 29, 2017, in Singapore.

Attended by 60 economists, analysts, and economics students, the seminar discussed issues covered in the ASEAN+3 Regional Economic Outlook (AREO) 2017 released by AMRO in early May in Yokohama, Japan. As AMRO’s annual regional surveillance publication, the AREO 2017 assesses the regional economic outlook and financial stability in 10 ASEAN countries, and China (including Hong Kong), Japan, and Korea. In this inaugural edition, the report also includes a thematic study of the region 20 years after the Asian Financial Crisis (AFC).

In his presentation on the regional economic outlook, Dr Khor highlighted that amid the external economic policy uncertainty, regional growth is anticipated to moderate slightly, but will be sustained at around 5 percent in 2017-18.

Financial markets have been largely stable, with the resumption of capital inflows after a period of outflows at the end of last year, although risks remain tilted to the downside due to global policy uncertainty. Policymakers will face a sharper trade-off between growth and financial stability objectives, at a time when policy space in monetary and fiscal policy has generally narrowed.  On structural developments, the region has become an important source of final demand, benefiting from growing regional integration and the rising middle class in Asia, with regional demand helping to cushion the impact of slowing global trade and the rising protectionist threat.

In comparison to 20 years ago during the Asian Financial Crisis (AFC), panelists underscored that Asia today has more robust buffers, and has made policy adjustments in exchange rate regimes, and structural reforms such as corporate and financial sector reforms.  Singapore is an example of an economy that was affected by contagion and spillovers during the AFC, but weathered it well with policy responses and economic restructuring to maintain international competitiveness.

The region today however faces other vulnerabilities such as rising household debt and increasing protectionist threats in global trade. Structural concerns include the ageing population and the shrinking labor force, which would have to be managed through labor market and social protection policies.  In this regard, while technological innovations may affect job creation, automation could also be timely in substituting for labor and increasing labor productivity.

In response to questions from the audience, a panelist said while it is difficult to predict the causes and the timing of the next crisis and the channels of contagion, it is important for economies to ensure that their policy frameworks are flexible and responsive, and to strengthen their buffers, so as to weather these shocks. In addition, enhanced financial cooperation in ASEAN+3 will improve the resilience against shocks, allowing the region to sustain relatively strong growth.