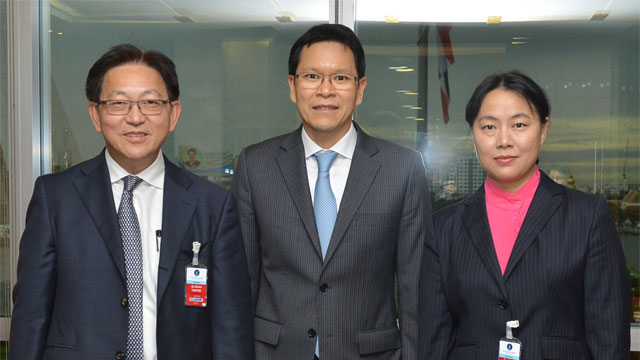 During the visit, AMRO staff had a series of meetings with the public sector, including the Ministry of Finance, the Bank of Thailand, Office of National Economic and Social Development Board, and other government agencies; the private sector; academics; and the World Bank. During the meetings, AMRO staff discussed a wide range of issues regarding the Thai economic outlook, risks and vulnerabilities, medium- to long-term growth prospects, and structural challenges. The discussions also focused on the appropriateness of policy measures, including the fiscal and monetary policy stance, and structural reforms.

The mission team presented its preliminary assessment of the Thai economy to the Thai authorities and will prepare a final assessment report once the mission returns to Singapore. In its preliminary assessment, the Thai economy forecasts to continue its recovery this year, growing at 3.0 percent, on the back of government consumption and investment, private consumption, together with an increase in exports of services, mainly tourism. Meanwhile, headline inflation is expected to edge up slightly on account of higher food prices and would reach the lower band of the policy target at the end of 2016. On the policy front, in light of tepid private investment, the government should maintain its expansionary fiscal stance and execute investment in public infrastructure in a timely manner. The mission supports the current monetary policy stance which is sufficiently accommodative. In view of the strong external position, the mission encourages the authorities to manage the exchange rate flexibly to avoid exchange rate misalignments.

AMRO would like to thank the Thai authorities for their kind hospitality and assistance in arranging the meetings. The visit to Thailand has deepened AMRO’s understanding of the current macroeconomic and financial situation, as well as critical issues related to macroeconomic stability in Thailand.