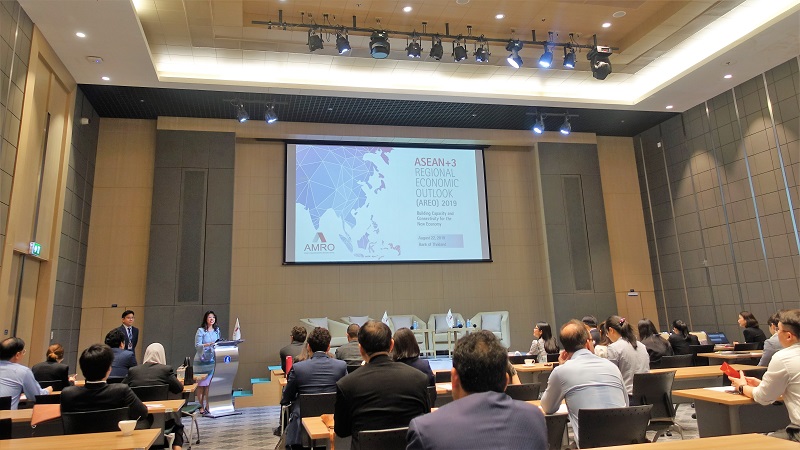 Technology is transforming regional economies, forcing both the public and private sectors in the ASEAN+3 region to change their mindsets and business models to adapt to the new ecosystem. This was highlighted by experts at a seminar on “Building Capacity and Connectivity for the New Economy” co-organized by the ASEAN+3 Macroeconomic Research Office (AMRO) and the Bank of Thailand (BOT) in Bangkok on August 22, 2019. This seminar is part of AMRO’s outreach program to introduce key findings of its flagship report, the ASEAN+3 Regional Economic Outlook (AREO) 2019, which was published in early May.

In her opening remarks, Ms Daranee Saeju, Senior Director, International Department, Bank of Thailand (BOT) highlighted that as the region transitions from manufacturing- to services-led growth, it faces both opportunities and challenges in the area of infrastructure investment, human capital management and regional cooperation. In his keynote presentation, AMRO Chief Economist Dr. Hoe Ee Khor highlighted major risks facing the region including the re-escalation of global trade tensions, a sharp slowdown in China’s growth, large swings in asset prices from global monetary policy shifts, a sharp deceleration in G3 growth, and rising geopolitical tensions. In this context, AMRO has revised regional growth from 5.1% to 4.9% for 2019–2020, given that some regional economies will be significantly affected by the latest round of tariff hikes. If the trade war escalates further, growth can be shaved down to 4.7%. Across the region, AMRO has also shaved down growth projections for individual economies that are more plugged into the global value chain such as Hong Kong, Singapore, Korea, Malaysia, and Thailand. However, Dr Khor also argued that as Thailand’s fundamentals are relatively strong; it has monetary and fiscal policy space to support the economy.

On the theme of building capacity and connectivity for the new economy, Dr Khor highlighted three key drivers, namely the 4th Industrial Revolution (4IR), maturing populations and a rapidly growing middle-class, as well as regional integration led by growing regional affluence and final demand. However, the region needs to address three key gaps, namely funding, foreign exchange and factors gaps. To bridge these gaps, the region should leverage on intra-ASEAN+3 investment, and strengthen the regional financial safety net, while developing professional expertise, technology, and institutions. 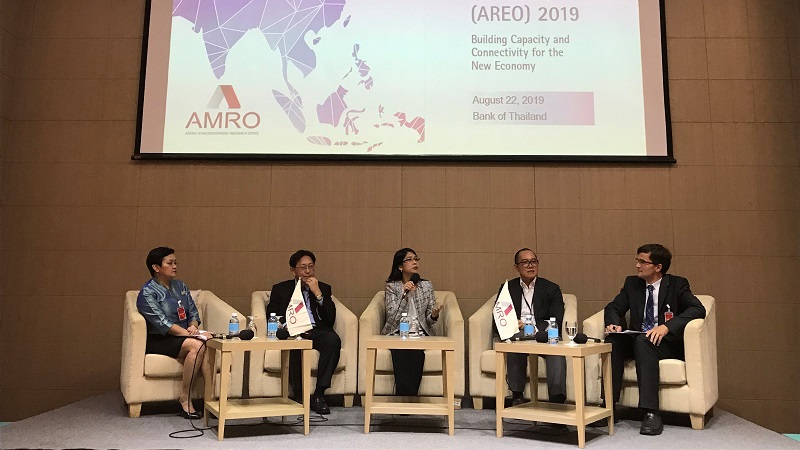 Panelists agree that one of the key challenges in embracing the new economy is preparing the workforce for technology disruption and transformation. Mr. Viegelahn pointed out that most governments currently focus on re-skilling and up-skilling the current labor force to cope with the demand for high-skilled workers in the transition to the digital economy. However, the governments should also make the best use of the current workforce, especially in encouraging more women to join the labor market. Along that line, Ms. Vonkorpon suggested to “trans-skill” the labor force, meaning workers with the same set of skills can move from one industry to another.

Based on his experience working in the banking and financial sector, Mr. Luangarpa sees the 4IR as a transformation rather than a disruption to the current economic framework. This has forced both public and private sectors to change their mindsets as well as business models to adapt to the new ecosystem. He observed that digital transformation tends to happen more quickly in emerging markets where the infrastructure and technology are lagging while the demand is high. He also mentioned that the business sector is open to frank discussion and knowledge exchange with the government.

Ms. Vonkorpon opined that the authorities should shift their mindset from being a regulator to a facilitator for the new economy. She also highlighted that the Thai government policy should be implemented comprehensively and cooperatively across the ministries.

Panelists also argued that new technology might pose a risk of widening inequality gap in terms of income and working conditions. Dr. Khor emphasized that social issues could be more challenging going forward and regional governments should enhance social safety nets to support those who are affected. He noted that the new technology could lead to job destruction but it could also create more jobs, by giving the example of the sharp increase in new Grab drivers in Singapore which more than offset the decline in traditional cab drivers. Mr. Viegelahn echoed Dr. Khor’s view on enhancing the social safety net, especially with an adequate pension system and broadened coverage, citing that only half of the elderly in Asia-Pacific are covered by pensions. 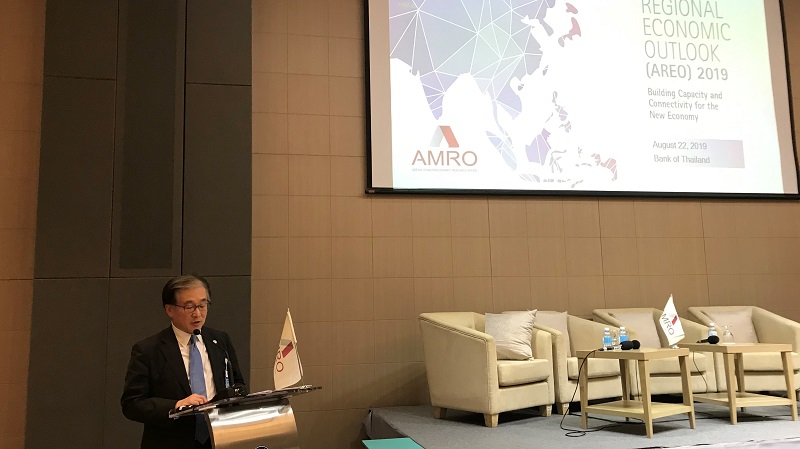 In his closing remarks, AMRO Director Mr. Toshinori Doi highlighted that regional linkages and connectivity can continue to be enhanced with trade agreements. He commended Thailand’s efforts in enhancing potential growth and improving connectivity through key initiatives such as the Thailand 4.0 and the Eastern Economic Corridor flagship project. With its strategic location in ASEAN, Thailand is poised to become a regional hub.