Building a More Resilient Region after the Asian Financial Crisis

Building a More Resilient Region after the Asian Financial Crisis 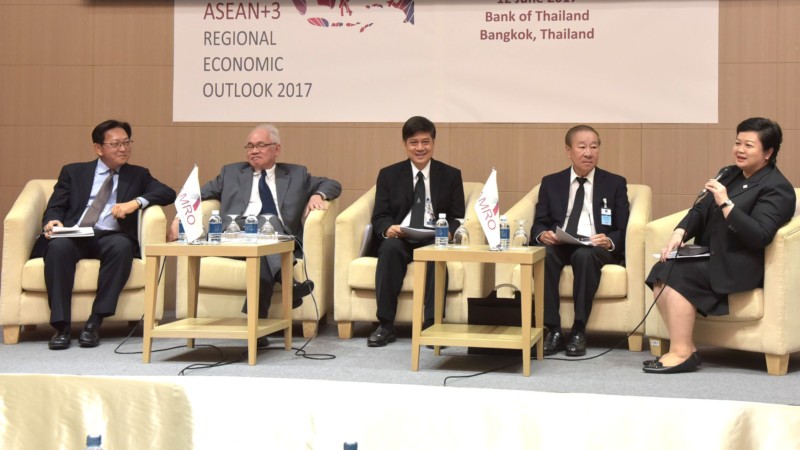 BANGKOK, THAILAND, June 12, 2017 – Lessons learned from the Asian Financial Crisis 20 years ago suggests that global and regional coordination has become more important in preventing and managing a crisis, as highlighted by experts at a seminar organized by the ASEAN+3 Macroeconomic Research Office (AMRO) and hosted by the Bank of Thailand (BOT) on June 12, 2017, in Bangkok, Thailand.

Attended by almost 100 economists and analysts from both public and private sectors, the seminar discussed issues covered in the ASEAN+3 Regional Economic Outlook (AREO) 2017 released by AMRO in early May in Yokohama, Japan. As AMRO’s annual regional surveillance publication, the AREO 2017 assesses the regional economic outlook and financial stability in 10 ASEAN countries, and China (including Hong Kong), Japan, and Korea. In this inaugural edition, the report also includes a thematic study of the region 20 years after the Asian Financial Crisis (AFC).

Dr Khor highlighted that growth in the ASEAN+3 region has moderated and is expected to be sustained at around 5 percent in 2017-18, while inflation is picking up but remains low. Amid the external uncertainties, regional growth will continue to be led by domestic demand although exports and private investment have picked up recently, alongside improvement in corporate profits.

However, the regional outlook is clouded by global uncertainty, including rising trade protectionism, tightening global financial conditions, and rising inflation. Panelists agreed that policymakers in the region should prioritize financial stability while supporting growth with an appropriate policy mix, including targeted macroprudential policy measures and sustained structural reform.

The Asian Financial Crisis: A wakeup call for the region

Called “a wakeup call” for the ASEAN+3 region by a panelist, the Asian Financial Crisis (AFC) has shaped policymakers’ perspectives on crisis management and resolution. Since then, the region has made impressive progress in rebuilding buffers and the policy foundations for economic growth, which enabled it to weather the Global Financial Crisis relatively well. These includes developing more robust monetary policy frameworks against external shocks, undertaking financial, fiscal and structural reforms to strengthen macro fundamentals, and the adopting of macroprudential measures to curb financial vulnerabilities.

As one of the countries hardest hit by the AFC, in the past 20 years, Thailand has undertaken wide-ranging and fundamental policy reforms in establishing an inflation targeting monetary policy framework with a flexible exchange rate regime, and in corporate and financial sector governance, and a risk based regulatory and supervisory framework.  These reforms have helped Thailand build up its reserve buffers and a strong fiscal position. The panelists agreed however that there is no room for complacency in view of continued global policy uncertainty, which has risks of contagion for our region.

For Thailand, the panel also discussed the structural challenges in the economy, which require a strong push on structural reforms to improve export competitiveness, raise private sector investment, and enhance labor productivity.

The panel also agreed that in the current uncertain global environment, the AFC continues to offer valuable lessons to policymakers moving forward. First, the region should closely to monitor the risks arising from financial markets and capital outflows. Second, with the speed and impact of contagion between economies, no country is immune from a crisis. Third, the AFC highlighted the need for a more flexible and responsive policy framework, and greater financial cooperation within the region to deal with external shocks.  In this regard, efforts to further enhance the Chiang Mai Initiative Multilateralisation (CMIM) as a robust regional safety net should be continued.