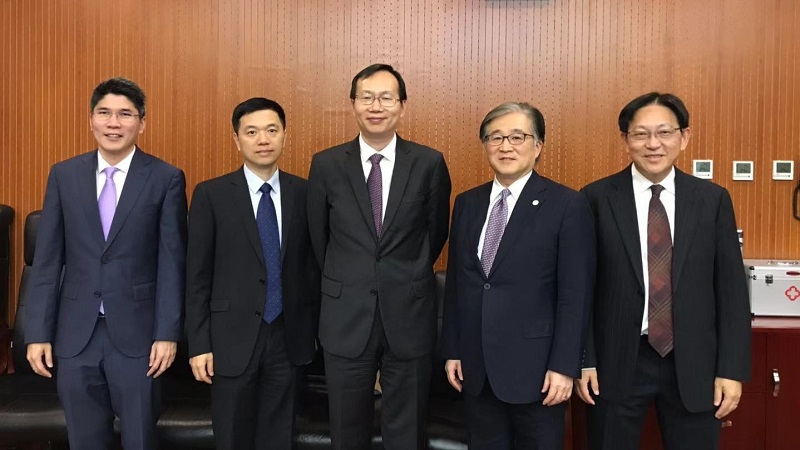 SINGAPORE, July 22, 2019 –The Chinese economy is expected to remain resilient in 2019 and 2020, supported by strong policy responses to mitigate external and domestic risks. This is according to the preliminary assessment by the ASEAN+3 Macroeconomic Research Office (AMRO) after its Annual Consultation Visit during July 8 to 16, 2019.

The mission was led by AMRO Lead Economist Dr Chaipat Poonpatpibul, while Director Mr Toshinori Doi and Chief Economist Dr Hoe Ee Khor participated in the policy meetings. Discussions were held on a wide range of topics, including China’s growth outlook, the impact of the US-China trade tension on the economy, effects of the stimulus package, and financial stability risks.

“China’s economy is expected to grow at 6.2 percent in 2019 and slow slightly to 6.1 percent in 2020,” said Dr Poonpatpibul. “Authorities have been using fiscal, monetary policy and macroprudential measures to support the economy and reduce risks amid a global slowdown and the ongoing U.S.-China trade tension as well as China’s deleveraging process. If these risks heighten further in 2019, there remains sufficient fiscal and monetary policy space for the authorities to continue supporting the economy.”

In the first half of 2019, the economy grew at 6.3 percent, with a broad-based but contained slowdown across exports, investment and consumption.

Exports will likely remain weak for the rest of 2019. Investment growth is expected to improve slightly on the back of buoyant investments in high-tech manufacturing, including 5G technology, and a moderate pick-up in infrastructure investment. Consumption of services could remain firm as China continues to transition to a services-driven economy.

In response to the slower growth, fiscal policy has become more expansionary in 2019, with sizeable tax and fee cuts. Monetary authorities have been using both broad-based and targeted measures to ensure adequate liquidity and support the economy. At the same time, macroprudential measures for the property sector have been tightened in the second quarter of 2019 to contain the build-up of risks.

The unresolved U.S.-China trade tension remains a major risk. It could pose a further drag on growth, through not only the trade channel but also the confidence channel. As corporate debt level is still high, a sharp slowdown of the economy could cause distress in the corporate sector and a significant increase in defaults. Weaker growth could also have a sizable impact on employment, particularly in export-oriented manufacturing and small and medium enterprises (SMEs).

The authorities should strengthen risk management and remain vigilant on financial sector risks, in particular spillover risks stemming from the highly interconnected small- and medium-sized banks, although regulatory efforts have improved the soundness of these banks in recent years. The authorities have continued with financial deleveraging efforts to reduce financial sector risks in the long run. They also acted decisively to calm the market after the takeover of a small bank in May 2019 by increasing the amounts of rediscounting windows and Standing Lending Facility (SLF) for small and medium-sized banks, among other measures. In addition, close coordination across regulatory agencies has also helped ensure timely and effective interventions.

On the monetary side, the authorities should persist with efforts to improve policy transmission mechanism and credit allocation. This, together with targeted measures, will help improve the allocation of credit, especially to SMEs.

We encourage the authorities to accelerate progress in important domestic reforms. Economic policies need to facilitate the transition to an innovation-driven economy, mitigate disruptions to traditional business models, provide support to affected workers to retrain and find new jobs, and reduce regional disparities. Authorities should retain a strong focus on supporting research and development, promoting innovation, embracing the application of new technologies, and developing the new economy. Efforts to enhance the social safety net and the momentum of state-owned enterprise reform should also continue.