Over the past 40 years of reform and opening-up, China has achieved remarkable economic development and it has had profound and significant impact on ASEAN. Going forward, enhanced cooperation based on good understanding of each other’s needs, strengths, capacities and priorities will help deepen regional integration and boost mutual benefits. This was highlighted by experts at a seminar themed “40 Years of China’s Reform and Implications for ASEAN” co-hosted by the ASEAN+3 Macroeconomic Research Office (AMRO) and ISEAS-Yusof Ishak Institute on December 04, 2018 in Singapore.

Attended by about 80 participants representing various academic institutions, international organizations, think tanks, the private sector, and the diplomatic community, the seminar used the paper titled “40 Years of China’s Reform and Implications for ASEAN” released by AMRO in October 2018 as background information for discussion. Several issues including the rising role of China at the global and regional levels, the increasing trend of intra-regional trade, investment and tourism in the medium term, and the prospects of the Belt and Road Initiative (BRI) in boosting growth and resilience were discussed.

In his presentation, AMRO Lead Economist Dr. Chaipat Poonpatpibul highlighted that China had upgraded itself from being a low-income country to one firmly in the upper-middle income bracket, which is poised to reach the high-income status in the coming years. Economic development in China has also significantly benefited the whole of East Asia, especially ASEAN economies, through rapidly rising trade, investment, and tourism. China has become an important engine of growth for ASEAN, while ASEAN has also become a strategic partner and an important market for China. Moving forward, several factors will buttress further integration between China and ASEAN. These include large and increasing size of Chinese and ASEAN markets, a growing working population in ASEAN, technology advancement, as well as the Belt and Road Initiative and ASEAN’s vision for connectivity.

Mr Jørgen Ørstrøm Møller, Visiting Senior Fellow of the ISEAS-Yusof Ishak Institute emphasized that there will be seismic changes. Given that 2015 was the last year in which China’s working population expanded, a shift in several types of manufacturing activities from China to other countries can be expected. The major beneficiaries would be ASEAN and India, potentially at the cost of reduced employment in China. He suggested that China could fund part of this shift and take the role of an innovation leader. 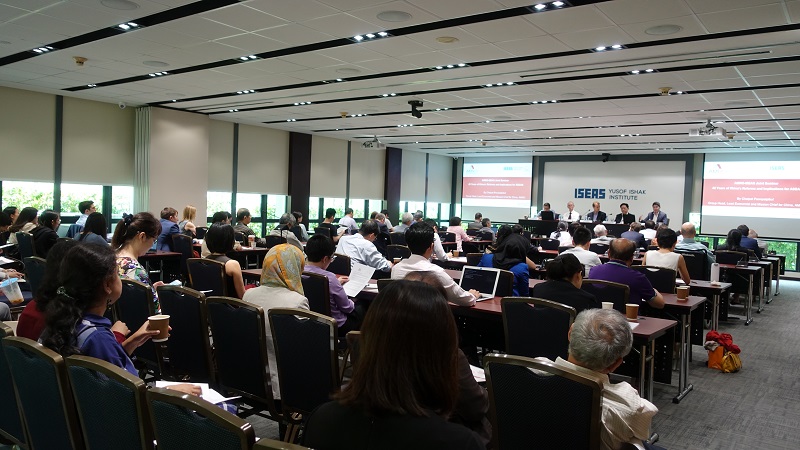 About 80 participants attend the seminar.

AMRO Chief Economist Dr Hoe Ee Khor expressed his optimistic view that China should be able to avoid a mass hollowing-out of jobs in the future. In parallel with China’s embrace of new technology, jobs will be lost to technology or lower-cost countries. However, new jobs will likely be created in new sectors, especially the services sector.

In response to questions from the audience about criticisms of BRI financing and governance, Dr Khor recounted how Japan had gone through a similar experience in the 1970-80s. He viewed that China should study the lessons from Japan’s experience and find a way to address these concerns in a more structured and broad-based way.

In response to further questions about what risks could potentially derail the development of China and ASEAN through to 2035, Dr Khor highlighted that China had learnt from past experiences and would be careful about its macroeconomic and financial policies going forward. In particular, China is now putting a much greater emphasis on safeguarding financial stability after having ramped up leverage sharply after the Global Financial Crisis along with rapid developments in shadow banking activities. He viewed that China has so far proven to be adept at ensuring soft landings after the episodes of excesses and imbalances in the past.

Dr Khor and Dr Poonpatpibul also stressed that ASEAN as a bloc have strong incentives and intention to ensure that economic integration with China would be managed in an orderly and equitable way taking into account the concerns of the region as the potential benefits from further integration are substantial.