Thailand and other economies in East Asia can leverage on technology and build on the growth of the services sector to support economic transformation and enhance economic inclusiveness. This was highlighted by experts at a seminar themed “Resilience and Growth in a Changing World” co-hosted by the ASEAN+3 Macroeconomic Research Office (AMRO) and Bank of Thailand (BOT) on June 12, 2018 in Bangkok, Thailand.

Attended by almost 100 participants representing various government agencies, financial institutions and think tanks, the seminar used the ASEAN+3 Regional Economic Outlook (AREO) 2018 released by AMRO in early May as background information for discussion. The seminar focused on the regional economic outlook, as well as how Thailand and the region can maintain its resilience and growth amid the disruptive forces of technology and changes in global value chains.

In his opening remarks, BOT Deputy Governor Mr Mathee Supapongse welcomed the second year of collaboration with AMRO in this event. He noted that the region was well-recognised as part of major global value chains and that exports had contributed significantly to economic growth. It was timely to touch on the opportunities and challenges posed by technology to the region’s growth model. 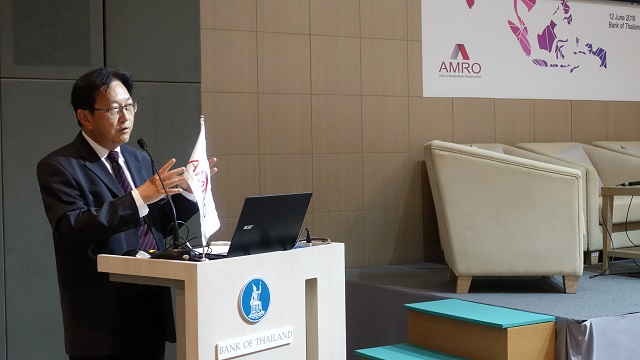 The panelists noted that East Asia continued to be aA

AMRO Chief Economist Dr Hoe Ee Khor, in his keynote presentation, highlighted the robust regional economic outlook, supported by exports and domestic demand. However, the region has to remain vigilant against two external near term risks: a faster-than-expected tightening in global financial conditions led by interest rate hikes in the U.S., and trade tensions between the U.S. and China with spillovers on our region. To address risks and sustain growth, policymakers should continue to build policy space, particularly in monetary policy, for tighter global financial conditions ahead. Fiscal policy may have to play a greater role in supporting growth, subject to available fiscal space and to fiscal rules. In sectors where vulnerabilities have built up due to rapid credit growth in the past, tightening macroprudential policy can help safeguard financial stability.

On the theme of resilience and growth, Dr Khor highlighted that ASEAN+3 economies have pursued a “manufacturing for exports” strategy over the past few decades, which has created a strong and self-reinforcing dynamic to boost economic growth, employment, productivity, and wages. This “manufacturing for exports” strategy is now put to the test by structural changes in the evolution of global value chains, which show signs of plateauing with enhanced domestic productive capacity that allows countries to produce instead of importing intermediate inputs.

On AMRO’s key recommendations are to leverage on technology, build the services sector as another engine of growth, and to leverage on growing intra-regional demand, Dr Khor highlighted Thailand as one of the ASEAN economies most integrated in global value chains, having attracted foreign direct investment to build its manufacturing base. Thailand is also leveraging on growing intra-regional integration by investing in and expanding its production networks into its neighboring economies.  In the services sector, Thailand also had a vibrant tourism industry that contributed to economic growth and employment.

bright spot in the global economy, thanks to earlier reforms and structural adjustments that economies in the region have undertaken. Growing intra-regional linkages in trade and investment within the region have also helped to bolster regional growth, at a time of weak external demand from outside the region.

Going into 2017, the external environment is even more challenging, with tightening global monetary conditions, policy uncertainty from the incoming U.S. administration and Brexit negotiations, and the rising risk of trade protectionism. The panelists discussed the tail risks for emerging markets, including capital outflows, currency depreciation and trade tensions. In that context, policy makers are advised to deploy the full suite of policy tools to deal with potential external risks, including appropriate monetary and fiscal policy settings to support growth while maintaining financial stability, and structural policies to lift the long-term growth potential of the economy.

Against the current backdrop of uncertainty in the external environment, strengthening regional financial cooperation can be beneficial to all economies in the region. 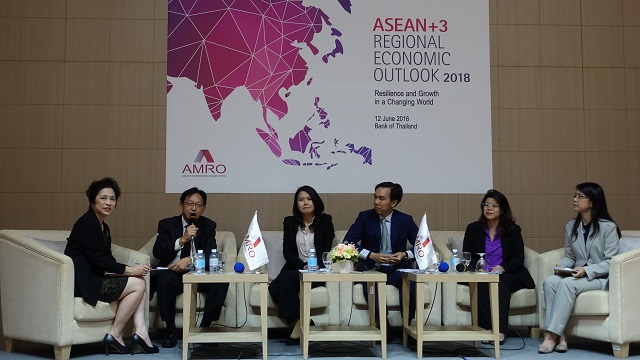 The panel had a lively discussion on whether “manufacturing for exports” could generate the same growth, productivity and employment in Thailand and in the region as it had in the past. The panel noted that while Thailand already has competitive indigenous multinational corporations, the challenge is to raise productivity in the rest of the economy and also develop the services sector to become a robust pillar of growth in addition to manufacturing. The panel recommended Thailand to study the example of advanced regional economies in integrating multinational corporations’ research and development (R&D) into a national R&D strategy with a strong orientation towards commercialisation and in building multinational corporations supported by dynamic small and medium sized enterprises.

The panel noted the potential of technology in lowering business costs, supporting new industries and more inclusive growth. The panel also agreed on the important role of coordinated government policies to support research and development and labor upskilling, and to implement these policies effectively in order to push ahead with economic transformation initiatives. 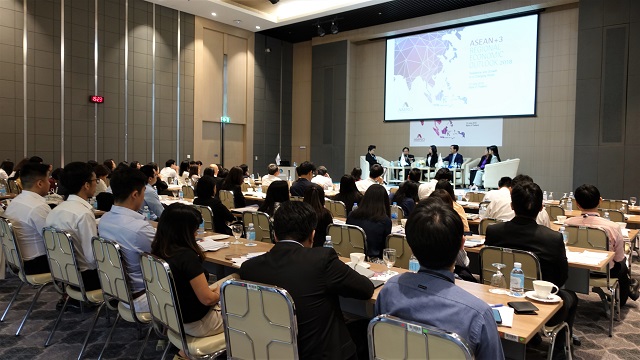