This article was published as an op-ed in Vietnam Investment Review on June 11, 2021. 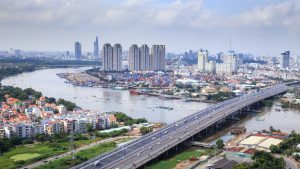 Foreign direct investment (FDI) into Vietnam has grown exponentially in the last three decades. Thanks to its economic reforms and integration into the global economy, the country is now considered to be among the most open economies in Asia in terms of FDI receipts. In 2019, it recorded nearly USD 39.0 billion of newly registered capital.

In 2020, despite the massive disruptions in global supply chains and dampened global economic activity, FDI into Vietnam registered a decline of merely 2 percent while global FDI flows shrank by over 40 percent. Vietnam’s attractiveness as an FDI destination amid the pandemic is largely credited to the country’s relatively successful containment of the pandemic and its manufacturing sector’s resilient export mix. Furthermore, the country greatly benefited from global value chain reconfiguration as several multinational companies (MNCs) are now moving or diversifying their production facilities from China to ASEAN countries to mitigate vulnerabilities of the existing supply chain network.

As supply chain reconfiguration continues unabated amid the unrelenting pandemic, it is vital to understand the key determinants of FDI into Vietnam for the country to remain an investment darling.

First, Vietnam’s competitive labor cost and ample labor supply constitute one of the main factors for the influx of FDI into Vietnam. In recent years, China’s rising income level and wages have eroded its cost competitiveness for low-value-added manufacturers and spurred many MNCs to relocate to countries with lower labor costs. Against this backdrop, with a population of over 97 million, of which almost 60 percent are under the age of 35, Vietnam’s abundant labor supply has allowed wages to remain competitive. Moreover, the country’s relatively skilled workforce has attracted FDI in industries that demand technological know-how, such as the electrical and electronics industry. However, Vietnam still has a long way to catch up with its regional peers in labor productivity.

Moving ahead, to capitalize on its young labor force and boost productivity, Vietnam needs to upgrade its tertiary education system and strengthen vocational and technical programs to ensure a sufficient supply of workers with adequate skills at attractive costs.

Second, with stiffer competition from other FDI destinations, the country needs to promote a favorable business environment. For more than a decade, comprehensive policy efforts by the Vietnamese government have fostered a friendly environment for foreign investors. Assistance is provided in various areas, ranging from land acquisition and registration to export and import custom procedures. Additionally, over the past decade, the country has lowered corporate income tax rates (the current rate is 20 percent) and provided generous tax breaks—such as for companies investing in high-tech sectors, certain industrial zones, and underdeveloped socio-economic regions. These policies help ensure cost-competitiveness for foreign companies operating in Vietnam.

Third, Vietnam’s proximity to key regional markets and fast expanding network of Free Trade Agreements (FTAs) have proven beneficial in attracting FDI. With China as a northern neighbor, Vietnam possesses easy access to one of the world’s largest consumer markets as well as a top supplier of intermediate inputs. Other major regional economies such as Japan and Korea are increasingly outsourcing parts of their supply chains to Vietnam, taking advantage of convenient shipping routes off its extensive shoreline.

Moreover, Vietnam’s own initiatives to expand its markets through numerous bilateral and multilateral FTAs, particularly with countries and regional blocs with large market potential, have made the country more competitive as a production hub. It is therefore crucial that Vietnam continues to enhance its transport and logistics infrastructure while broadening and deepening relations with its trading partners. This has become even more crucial now that bottlenecks in transport infrastructure, such as land connectivity and port capacity, are a growing concern as the economy develops.

Lastly, the COVID-19 pandemic has accelerated global supply chain reconfiguration, and Vietnam has emerged as a beneficiary in the process. Even before the pandemic, Vietnam was among the top destinations for “diverted FDI” in the region at the height of the U.S.- China trade tensions. In 2019, around USD 1 billion worth of co-location plans were announced, from only USD 76 million in 2017.

As border control measures were imposed to limit the COVID-19 contagion, a large number of firms whose production relied on imported intermediate input were suddenly cut off from their supply network, hindering their operations. At the same time, many firms with high dependence on certain countries as final sources of demand experienced difficulty in exporting to those markets. These trade bottlenecks served as a further impetus for firms to diversify their production base. With its expanding production capacity and relative success in controlling the COVID-19 outbreak, Vietnam is one of the most promising countries for co-location or relocation of production.

In the near term, Vietnam must once again demonstrate its resilience against the pandemic through effective containment of the current outbreak. Successful control of the virus will safeguard the country’s production capacity and its reputation as a major investment destination.