Rising protectionism continues to threaten multilateralism and economic integration globally. As a key player in global trade, Japan has been feeling the impact of economic headwinds emanating from the escalation of the on-going U.S.-China trade tensions, particularly as it is entering into trade talks with the U.S. Although short-term downside risks are rising for Japan, its economy could benefit in the long run from a changing global production network as it is nimble and experienced in coping with global trade reconfigurations.

Our recent Annual Consultation Report on Japan looked beyond exports into the other channels through which the U.S.-Sino trade conflict has impacted the Japanese economy. Although it is hard to quantify, it is nevertheless crucial to investigate the impact of the trade conflict on Japan’s manufacture products through the following three trade channels identified in Figure 1. 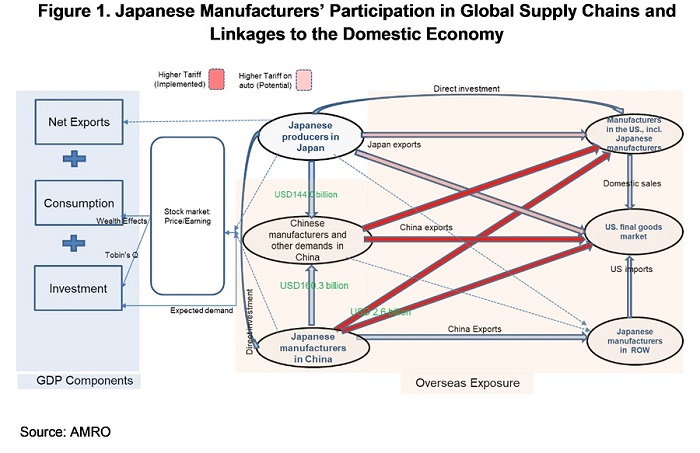 The first channel is through the impact on Japanese manufacturers in China selling directly to the U.S. market as Chinese exports. Forty-five percent of the sales revenue of Japanese firms in China was from exports in 2018; however, only 1 percent—or around USD3 billion worth of exports—went to the U.S., according to our estimates based on Ministry of Economy, Trade and Industry (METI) data.

In total, we estimate the amount of Japanese manufacture goods affected by the trade conflict to be around USD307 billion as of 2018. These goods could be negatively affected by slower U.S. demand for Chinese goods due to higher tariffs, or slower demand in China. Such exposure is in turn related to Japan’s global investment position and associated investment income. For example, as of end-2017, Japanese corporates received around USD116 billion of investment income from overseas, of which China accounted for 13 percent. In terms of stock, China accounted for 8 percent of Japanese overseas investment.

If corporate earnings of Japanese companies are expected to fall through the channels mentioned above, it could weigh on the country’s overall equity market. Meanwhile, the expectation of softer demand in China and lower investment returns from China could dampen overall corporate investments in Japan. It must be noted, however, that some drivers for domestic investment growth are structural – such as R&D to develop next-generation products, and automation to replace labor – and these drivers are not likely affected by short-term factors.

While Japan has a large exposure to US tariff measures on imports from China through various channels, the relocation of manufacturing activities to other countries could provide a buffer and reduce the negative impact in the medium term. An increasing number of Japanese manufacturers have shown a willingness to transfer production out of China in the past year. While some of these companies are considering strengthening their bases in third countries, others plan to expand their production in the U.S. or Japan. Nevertheless, large scale relocation to the U.S. or back to Japan is unlikely due to the tight labor markets and higher wages.

In the context of an uncertain trade deal outcome between the U.S. and China, a new round of U.S.-Japan bilateral trade negotiations will be crucial for the Japanese economy. The planned meetings between top U.S. and Japanese trade negotiators in April-May will set the agenda for trade, including for the automobile sector, which accounted for 37 percent of Japan’s exports to the U.S. and 78 percent of Japan’s trade surplus with the U.S. in 2017, making it a key discussion point in negotiations.

President Donald Trump’s agenda to protect American industry—as seen through the lens of the new U.S.-Mexico-Canada Agreement—includes recalibrating tariffs for the automobile sector to incentivize the on-shoring of automobile producers. This means that the U.S. will be less likely to compromise in trade talks with the E.U. or Japan. That said, Japanese automakers have been diversifying their production bases and export destinations since the 1980s amid trade conflicts with major trading partners and bouts of sharp appreciation of the Japanese yen. They can, therefore, adjust flexibly to changes in the global trade environment, and this would help Japan to mitigate the negative impacts of the ongoing trade tensions.