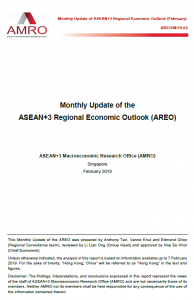 As expected, the Fed decided to keep its policy rate on hold (at 2.25–2.5 percent) at the January 30 Federal Open Market Committee meeting and has also signaled that it will pause interest rate hikes and be flexible in normalizing its balance sheet as it seeks to ensure maximum employment and price stability. Global markets have rebounded as volatility declined further in the second-half of January and has remained relatively stable in February, while global markets rallied. U.S. employment surged, despite the temporary government shutdown. The earnings of U.S. companies also held up well in 2018. In the Eurozone, softer economic outlook is predicated on expectations of a China slowdown, declining stimulus from the U.S.’s tax cuts, and the spectre of a trade war. The lack of any clear path to Brexit continued to weigh on the UK’s economy.

In ASEAN+3 region, slowing manufacturing performance signals a softer outlook in the face of external headwinds. The maturing tech-cycle and continuing uncertainty from trade tensions saw a sharp drop in new export orders. With the exception of Malaysia and the Philippines, export values contracted across countries. China’s monthly indicators point to economic activity slowing further, impacting corporate profits. In Japan, major economic indicators point to a weaker economic outlook going into 2019. In the ASEAN region, data of the fourth quarter of 2018 showed an improvement in economic activity across major economies, compared to the previous quarter, as domestic demand continue to hold up.

Countries in the region have kept their policy rates on hold, and the benign inflation environment provides some respite for monetary policy, even as the risk of faster-than-expected tightening in global financial conditions recedes.

Monthly Update of the AREO – January 2019