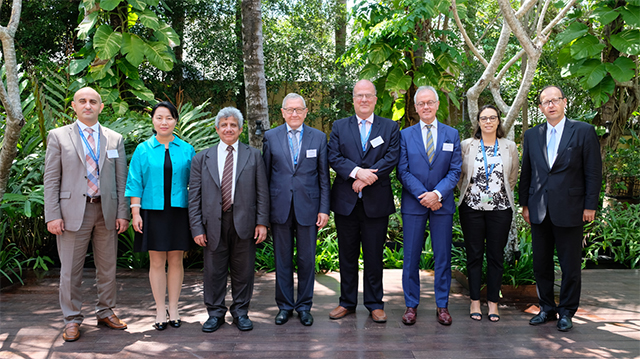 BALI, INDONESIA, October 10, 2018 – Today, heads of regional financing arrangements (RFAs) around the globe convened at the 3rd High-level RFA Dialogue in Bali, Indonesia, to discuss new developments in their institutions and respective regions, and cooperation among RFAs and between RFAs and the International Monetary Fund (IMF).

Inaugurated in October 2016 and co-organized by the ASEAN+3 Macroeconomic Research Office (AMRO), the European Stability Mechanism (ESM), and the Fondo Latinoamericano de Reservas (FLAR), this annual high-level dialogue serves as a platform to discuss key policies pertaining to the developments of RFAs and their contribution to the global financial safety net (GFSN).

“Amid the current volatile global environment, the role of RFAs and well-coordinated efforts among different levels of the global financial safety net have become more critical than ever,” said AMRO Director Dr Junhong Chang. “I believe that the high-level dialogue this year is a good opportunity for RFAs to exchange knowledge and experience, and to strengthen collaboration to better contribute towards securing global and regional economic and financial stability.” 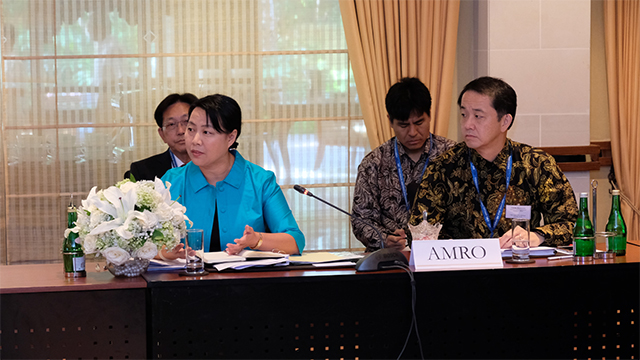 During his keynote speech at the dialogue, Mr Tharman Shanmugaratnam, Deputy Prime Minister of Singapore, and in his capacity as Chairperson of the G20 Eminent Persons Group, presented the group’s recommendations on making the GFSN more predictable and resilient. He called for closer coordination between the IMF and RFAs when large-scale financing is needed to support countries during global liquidity shocks. This would enable consistent actions during crises to achieve the necessary scale and global impact in order to minimize contagion while promoting openness and growth. In response, the participating RFAs and the IMF welcomed the report and confirmed their commitment to further strengthen cooperation. 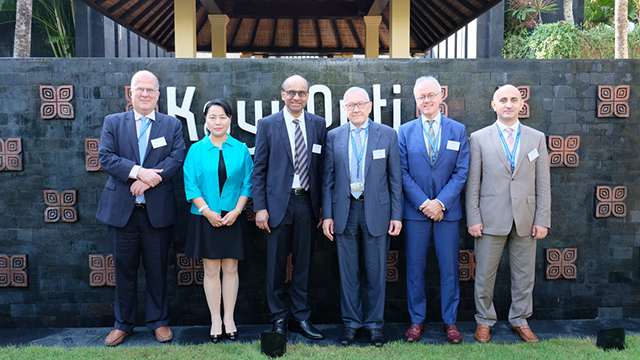 Mr Tharman Shanmugaratnam, (third from left) Deputy Prime Minister of Singapore, and in his capacity as Chairperson of the G20 Eminent Persons Group, with head of delegations at the 3rd High-level RFA Dialogue.

At the dialogue, the participating RFAs reported on developments in their regions and the risks that their regions have faced since the last dialogue in October 2017. To better support members in meeting potential financial turmoil, some RFAs have extended new financial assistance programs while others have continued with post-program monitoring or test runs.

The participants supported a staff paper jointly prepared by the RFAs on IMF-RFA collaboration in which some key areas for enhanced collaboration were identified, such as joint training programs and improved information sharing channels. To leverage on broader efforts for global and regional financial stability, the RFAs added a new topical feature to this year’s discussion by inviting Multilateral Development Banks (MDBs) to share their experience of close collaboration within the MDB network.

The participating RFAs reaffirmed their commitment to further enhance this dialogue and institutionalize it as the leading platform to discuss pertinent policy issues on the strengthening of the GFSN. 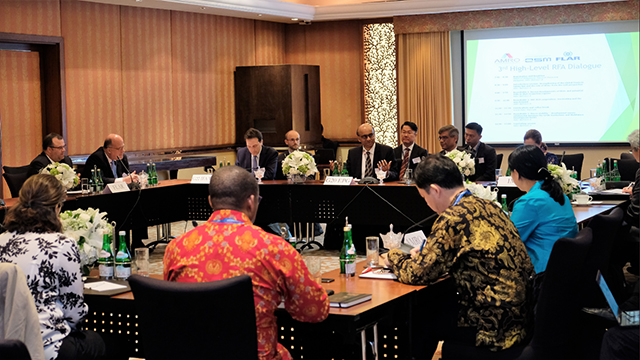 At the 3rd High-level RFA Dialogue, participating RFAs reaffirmed their commitment to further enhance this platform.

In addition to the three organizing institutions, this year’s dialogue was attended by representatives from the Arab Monetary Fund, the BRICS Contingent Reserve Arrangement, the Eurasian Fund for Stabilization and Development, the European Commission, the G20 International Financial Architecture Working Group, and the IMF.

The third Joint RFA Research Seminar will take place in May 2019 in Luxembourg, and the fourth High-level RFA Dialogue will be convened during the IMF/World Bank Annual Meetings in 2019 in Washington, D.C.

The ASEAN+3 Macroeconomic Research Office (AMRO) is an international organization established to contribute to securing the economic and financial stability of the ASEAN+3 region, which includes 10 ASEAN countries and China (including Hong Kong), Japan, and Korea. AMRO fulfils its mandate by conducting macroeconomic surveillance, supporting the implementation of the regional financial arrangements, the Chiang Mai Initiative Multilateralisation (CMIM), and providing technical assistance to the members.

Working Together across Regions to Strengthen Macroeconomic Stability and Prosperity