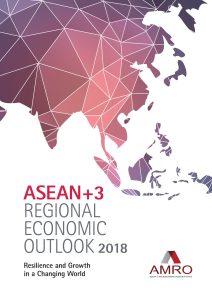 Boosted by favorable global conditions in 2018, the economic outlook has improved across the ASEAN+3 economies. At the same time, the region has to remain vigilant given the significant external risks in the near term of trade protectionism and a faster-than-expected tightening in global financial conditions.  In the longer term, structural trends in regional production and trade networks and technology are prompting policymakers in the region to relook at appropriate policies to secure growth and development in future.

In this context, the ASEAN+3 Regional Economic Outlook (AREO) 2018 produced by the ASEAN+3 Macroeconomic Research Office (AMRO) discusses the economic prospects for the 10 members of the Association of Southeast Asian Nations, and China, Hong Kong, China, Japan and Korea, and a thematic study on “Resilience and Growth in a Changing World”.

How do global value chains, changes in technologies and services, and the benefits of regional integration affect the region’s “manufacturing for exports” strategy, which has brought much success in lifting growth over the past few decades? How should the region weather protectionism and disruptions from technology? What are policy recommendations to support continued resilience and growth?

These questions and more will be discussed by AMRO Chief Economist Dr Hoe Ee Khor and Lead Specialist Ms Chuin Hwei Ng at the AREO 2018 launch on May 3, 2018 in Manila, the Philippines.

The event is open to the media.

The ASEAN+3 Regional Economic Outlook (AREO) provides a comprehensive assessment of recent developments and the outlook for the regional economy, taking into account spillovers from the global economy and inter-linkages in financial markets.

The first part on ASEAN+3 Macroeconomic Prospects and Challenges contains AMRO’s regional outlook assessment and regional growth projections at 5.4% in 2018 and 5.2% in 2019. This section also includes AMRO’s Global Risk Map, while summarises the risks faced by the region. An assessment of each economy’s position in the business and credit cycles supports the policy recommendations discussed in this section. The thematic study, Resilience and Growth in a Changing World examines the continued relevance of the “manufacturing for exports” strategy that have been adopted by ASEAN+3 economies over the last few decades, and how this strategy can be augmented with the challenges posed by changes in global value chains, technology and the rise of the services sector.  It includes recommendations on how the region as a whole can strengthen intra-regional connectivity and integration as well as build its resilience against external shocks.

Mr. Guinigundo is the deputy governor for the Monetary Stability Sector, Bangko Sentral ng Pilipinas (BSP), since 2005. He has been serving the BSP for 40 years. Previously, he was assistant governor for monetary policy and international operations. In 2001–2003, he was alternate executive director at the International Monetary Fund in Washington DC. Since 2000, Mr. Guinigundo has co-chaired with Bank Negara Malaysia the SEACEN Experts Group on Capital Flows, and in 2010–2013 and 2016–2018, the ASEAN Senior Level Committee on Financial Integration.

Dr. Khor is the Chief Economist of AMRO responsible for overseeing and developing the work on macroeconomic and financial market surveillance on East Asia and on the member economies in the region. He is also a member of the senior management team responsible for setting the strategic direction and management of AMRO.

Prior to joining AMRO, Dr. Khor was a Deputy Director of the Asia and Pacific Department (APD) at the International Monetary Fund (IMF), responsible for overseeing the surveillance work on six ASEAN and twelve Pacific Island countries.  Dr. Khor started his career as an economist at the IMF in 1981 and had worked on a wide range of economies in the Western Hemisphere and Asia and Pacific departments. He was the IMF Deputy Resident Representative in China from 1991-1993.

Dr. Khor obtained his Bachelor’s Degree in Economics/ Mathematics from the University of Rochester and a Ph.D. in Economics from Princeton University.

Prior to joining AMRO in 2014, Ms. Ng served in the Monetary Authority of Singapore (MAS) in diverse central banking functions for 20 years. Her last position with MAS was Director in the Prudential Policy Department, responsible for banking regulatory policy including prudential limits, policies on housing and unsecured credit, and deposit insurance. She also served as a bank supervisor leading a team supervising foreign banks in Singapore from 2004 to 2008 and in international relations handling ASEAN and Financial Action Task Force (FATF) issues from 2001 to 2003, and as an economist conducting surveillance on China and ASEAN from 1994 to 1999.

The region should improve connectivity, grow a vibrant services sector, and develop a skilled labor force

MANILA, PHILIPPINES, May 3, 2018 – Boosted by favorable global conditions, economic growth in the ASEAN+3 region has been underpinned by resilient domestic demand and export growth, with stable inflation, says a new report released today by the ASEAN+3 Macroeconomic Research Office (AMRO).

As AMRO’s annual regional surveillance publication, the ASEAN+3 Regional Economic Outlook (AREO) assesses the regional economic outlook and financial stability in the region, which includes 10 members of the Association of Southeast Asian Nations and China, Hong Kong, China, Japan, and Korea. In this year’s edition, the report also includes a thematic study titled “Resilience and Growth in a Changing World”.

“With improving external demand, growth in the region is expected to be sustained at 5.4% for 2018 and 5.2% for 2019,” says AMRO Chief Economist Dr Hoe Ee Khor. “However, in view of the risks of tightening global financial conditions and trade protectionism, it would be prudent for policymakers to prioritize financial stability over the economic growth objective.”

Despite resilient domestic demand and stronger external demand for exports, the region is facing two near-term risks: faster-than-expected tightening in global financial conditions led by the U.S. Fed’s interest rate hikes and an escalation of global trade tensions. If these risks materialize, there would be spillovers to the region through capital outflows, higher borrowing costs, and lower trade and investment flows.

Improving external demand has allowed the region to build up buffers further against potential external shocks. Regional exchange rates have become more flexible in recent years, and have played a greater role as a shock absorber.

To enhance resilience, policymakers in the region should continue to build policy space, particularly in monetary policy, in anticipation of tighter global financial conditions ahead. Fiscal policy may have to play a greater role in supporting growth while macroprudential policy can help safeguard financial stability.

The AREO 2018 also contains a thematic study on how the region can maintain its resilience and growth in view of fundamental and global changes in technology and in trade and production networks. These global forces are putting the region’s “manufacturing for exports” growth strategy, which has spurred the region’s growth and development over the past decades, to the test.

Technology has proven to be a double-edged sword as manufacturing is becoming more capital and skills intensive and will no longer employ as much labor as in the past.  Structural changes in global value chains have also allowed countries to produce domestically instead of importing intermediate inputs. However, technology has facilitated the emergence of the services sector as a potential new engine of growth and employment.

To address these challenges, the region as a whole should strengthen intra-regional connectivity and integration to leverage on growing intra-regional final demand and improve the resilience of the region as a whole against external shocks such as protectionism. Individual economies should build resilience through developing multiple engines of growth, including the growing services sector.

“The ample resources and diversity in development within the ASEAN+3 region are sources of strength,” says Dr Khor. “The region should improve connectivity through investment in infrastructure with trade facilitation policies, grow a vibrant services sector, and develop a skilled labor force through labor upskilling, immigration, and education.” 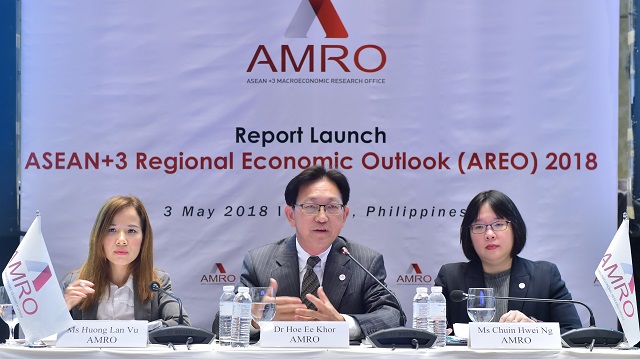 AMRO Chief Economist Dr Hoe Ee Khor (middle) delivers a presentation on the key findings of the ASEAN+3 Regional Economic Outlook (AREO) 2018 at the report launch on May 3, 2018, in Manila, Philippines. 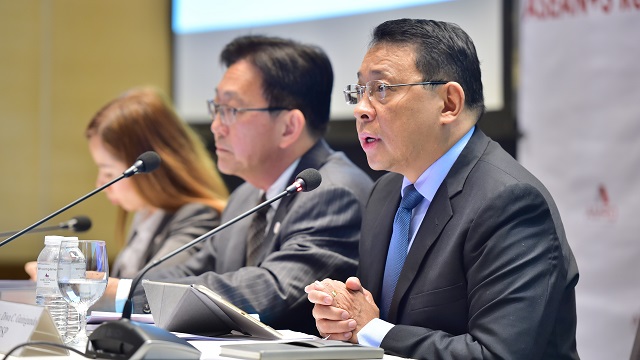 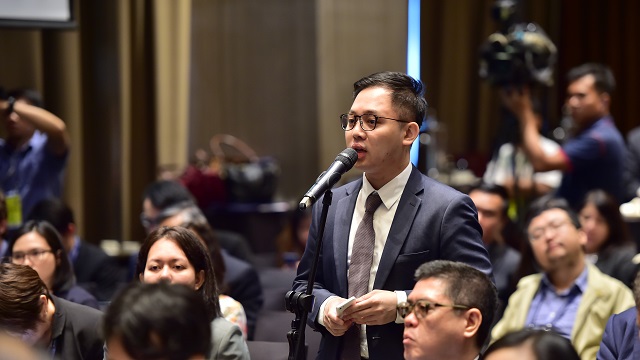 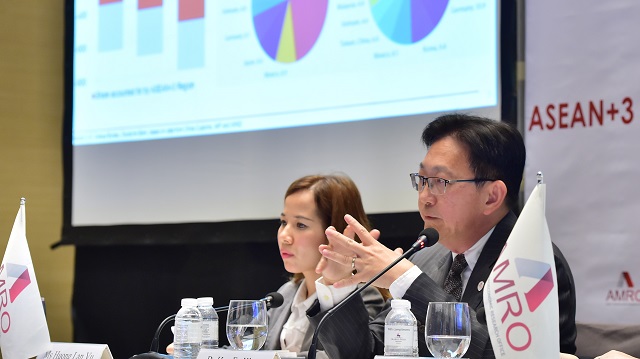