Seminar: Building Capacity and Connectivity for the New Economy in East Asia

Seminar: Building Capacity and Connectivity for the New Economy in East Asia 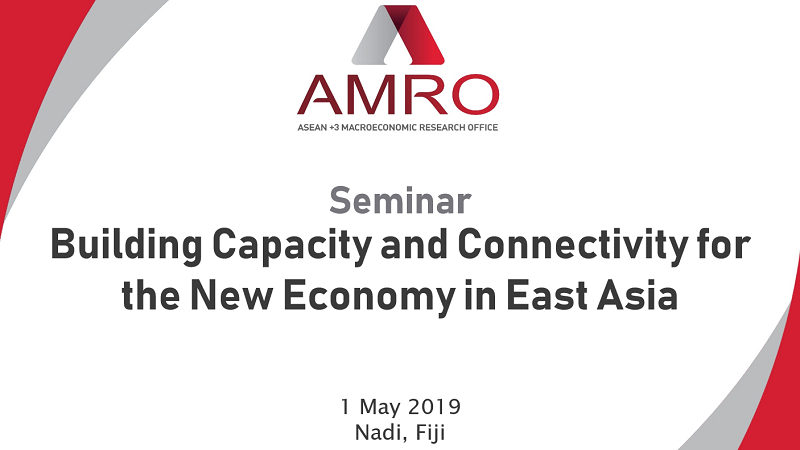 A seminar on the theme “Building Capacity and Connectivity for the New Economy in East Asia” follows the launch of the ASEAN+3 Regional Economic Outlook (AREO) 2019. The seminar will focus on how East Asia, as one of the most dynamic emerging market regions in the world, can tackle multiple challenges related to strengthening their collective development capacity and cross-border connectivity. High-level speakers will discuss how the region can prepare itself to rise to the challenges of the “new economy,” sustain buoyant growth, and continue to embrace and benefit from globalization—at a time when protectionist tendencies in the trade and technology space are rising.

At the seminar, AMRO will present key findings of the thematic part in its flagship report, the ASEAN+3 Regional Economic Outlook (AREO) 2019, to set the context for the discussion. Prominent speakers and participants, who include ASEAN+3 policymakers and leaders of multilateral banks, will be invited to share their insights and exchange views from various perspectives. The seminar will provide an opportunity to understand better how the region can react to global economic trends and further strengthen regional cooperation.

The event will invite ASEAN+3 decision-makers, and will be open to other participants and media. Please go to the registration page to register for the event.

Dr. Khor oversees the work on macroeconomic and financial market surveillance of AMRO’s member economies. Prior to joining AMRO, Dr. Khor was Deputy Director of the Asia and Pacific Department (APD) at the International Monetary Fund (IMF). He also served as Assistant Managing Director of the Monetary Authority of Singapore (MAS) from 2001 to 2009.

Francisco G. Dakila, Jr. is the Assistant Governor of the Monetary Policy Sub-Sector, Bangko Sentral ng Pilipinas. He provides highly-technical advisory support on matters relating to the formulation, implementation and assessment of policies and programs in his areas of specialization, which include the monetary, external, real and financial sectors.

Marzunisham Omar is the Assistant Governor of Bank Negara Malaysia responsible for economics and monetary policy, as well as overseeing international relations. Marzunisham is a member of the Bank’s Monetary Policy Committee, Management Committee and Reserve Management Committee with 25 years’ experience in economic and monetary policy formulation, financial sector regulation and development, and financial inclusion.

Marzunisham served as an Executive Director of the International Monetary Fund (IMF), representing countries in the South East Asia Constituency. As a member of the Executive Board, Marzunisham played a part in key decisions of IMF activities, including surveillance, policy advice, technical assistance and lending programmes. Marzunisham holds a BA and MA in Economics from Cambridge University.

Dong-ik Lee is the Director General at the Investment Operations Department of the Asian Infrastructure Investment Bank (AIIB). Before joining AIIB, he was Corporate Advisor for Temasek, Singapore. From 2008 – 2013, he worked for Korea Investment Corporation as Chief Investment Officer and Head of Alternative Investments. Mr Lee has a Bachelor’s degree in Economics from Korea University, an MBA in Finance and Investments and a Master’s degree in Management Information Systems from George Washington University.

Mr. Sawada is the chief spokesperson for ADB on economic and development trends, and leads the Economic Research and Regional Cooperation Department (ERCD), which publishes ADB’s flagship knowledge products. His research interests include macro- and micro-development economics, microeconometrics, economics of disasters, and field surveys and experiments. He possesses rich experience in policy-oriented research with various universities and institutions – including Crawford School of Public Policy, Japan International Cooperation Agency (JICA) Research Institute, and the World Bank.

Chikahisa Sumi was appointed Director of Regional Office for Asia and the Pacific, International Monetary Fund in 2016. He has worked on Asia and the Pacific counties for seven years in the IMF, also headed the Financial Sector Surveillance Group of the Asia and Pacific Department, and led the Future of Asia’s Finance project. Before IMF, he held key positions in the Japanese Government, including Deputy Vice Minister of Finance for International Affairs, and Deputy Commissioner of Financial Services Agency.

“Building Capacity and Connectivity for the New Economy in East Asia” Seminar
Nadi, Fiji
1 May 2019

1. Good morning. I am honoured to address this gathering of high-level policymakers, subject matter experts, and many colleagues from the region. AMRO organizes several such seminars every year, to solicit thoughts and views on key long-term issues facing our region.

2. ASEAN+3 economies have come a long way since the 1997 Asian Financial Crisis. The members collectively have transformed from being a crisis-shaken region in the late 1990s to one which came through the Global Financial Crisis in the late 2000s relatively unscathed, and is now positioning itself for sustained strong growth in the years ahead. Thanks to sound macroeconomic policies, the region has enjoyed almost uninterrupted rapid development and growth convergence over the past two decades, with many ASEAN+3 economies now looking towards achieving high-income or upper-middle income status in the near future.

3. However the region is still confronted with daunting medium- and long-term structural challenges, which if not addressed decisively, will impinge on potential growth and prosperity. What are some of these?

4. This then is the context in which we have set the theme for this year’s seminar, which is also the thematic chapter of our flagship report, the ASEAN+3 Regional Economic Outlook 2019. The theme is very much in the spirit of how in the past two years, we at AMRO have put in considerable effort to analyse the nature of medium- and long-term structural challenges facing ASEAN+3 economies at different stages of development, and put forward suggestions on how to address these challenges.

5. While the theme of building capacity and connectivity can be said to be evergreen, especially for emerging countries, the key challenge at this juncture is that ASEAN+3 economies need to transition to the “New Economy.” This adds urgency to the task of addressing the structural constraints facing the region. We therefore ask: to move progressively beyond the “manufacturing for exports” strategy to embrace the new technological revolution and the services sector, what are the types of capacity and connectivity needed for the region to grow and thrive? What could impede our region’s efforts in this regard? What can policymakers do to get on top of the challenges?

6. In the panel session which will begin shortly, we can look forward to hearing from a very strong line-up of policymakers, subject matter experts, and those of us working on regional cooperation to reflect and share views. I very much look forward to a lively and illuminating discussion.

NADI, FIJI, May 1, 2019 – ASEAN+3 economies, after two decades of prospering with the “manufacturing-for-exports” strategy, should now focus on building capacity and connectivity to leverage on the Fourth Industrial Revolution in order to sustain growth in the new economy. This was underscored by participants at the seminar on “Building Connectivity and Capacity for the New Economy in East Asia” organized by the ASEAN+3 Macroeconomic Research Office (AMRO).

The key findings of the thematic study in the ASEAN+3 Regional Economic Outlook (AREO) 2019 was presented at the seminar to set the context for discussion. Speakers and participants, including high-level policymakers and senior officials of international organizations, shared their insights and perspectives on how the region could prepare itself for the new economy, sustain robust growth, and continue to embrace and benefit from globalization, at a time when protectionist tendencies in the trade and technology space are rising. 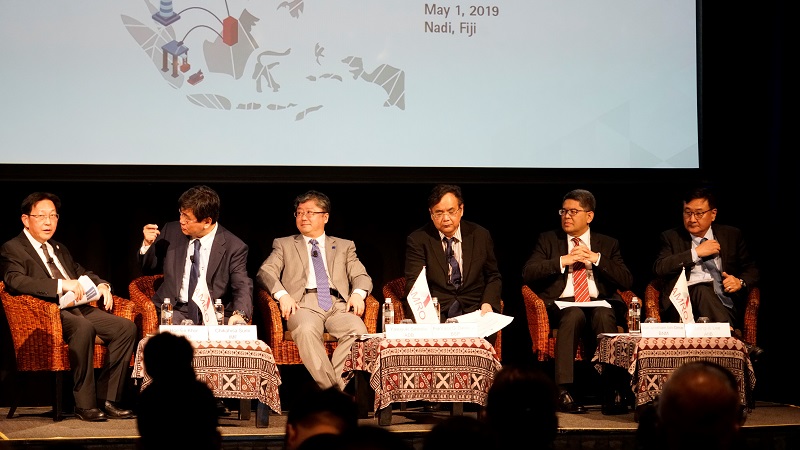 “ASEAN+3 economies have come a long way since the 1997 Asian Financial Crisis. They have collectively transformed from being a crisis-shaken region in the late 1990s to one which stood resilient against the Global Financial Crisis in the late 2000s, and which is now positioning itself for many more years of rapid growth. For the next phase of economic development, the region needs to redouble its efforts to enhance capacity and cross-border connectivity in order to successfully transition to the new economy,” said AMRO Director Dr. Junhong Chang in her opening remarks.

In his presentation, AMRO Chief Economist Dr Hoe Ee Khor noted that while the move up the technological frontier has been, and will continue to be, uneven, the transformation to services is inevitable. Consequently, it will require a rethink of what capacity means, and what connectivity is needed in the new economy. Globally, manufacturing and services will be transformed by the Fourth Industrial Revolution. Going forward, they will require higher levels of technology, expertise and connectivity to deliver customized goods, services, and above all, experiences to an increasingly large and affluent middle class. 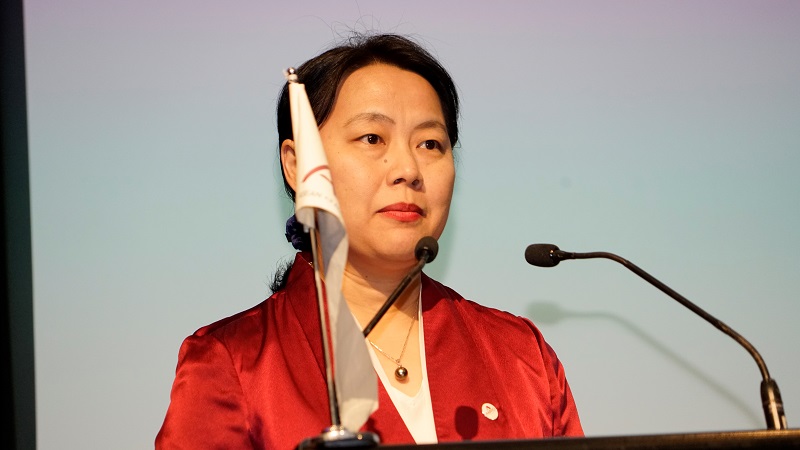 AMRO Director Dr Junhong Chang emphasizes need for the ASEAN+3 economies to build capacity and connectivity to successfully transition to the New Economy.

The panel discussed three key drivers that will shape capacity and connectivity priorities in the region over the short- to medium term. These include the Fourth Industrial Revolution and the new economy, involving rapid technological advancement and a much bigger role for the services sector; maturing populations, and a rapidly growing middle class driving demand for goods and services and propelling innovation and a shift to more customized services; and deepening regional integration spurred by market forces and rising protectionist tendencies elsewhere.

The panel also noted that developing economies in the region continue to face three key challenges to growth, namely the funding, foreign exchange, and factors gaps.

To bridge the funding and foreign exchange gaps, the region should continue to leverage on its savings and investments and strengthen the regional financial safety net to safeguard financial stability and economic resilience. In recent years, ASEAN+3 developing economies have benefited from growing intra-regional investments. The region as a whole also has ample foreign reserves, and a further strengthening of the regional financial safety net, centered on the Chiang Mai Initiative Multilateralisation, will provide a strong anchor for the region to continue pursuing rapid and high-quality growth.

To meet the factors gap, the region should continue developing professional expertise, technology and institutions, and leverage on various initiatives to build regional capacity and connectivity, such as the Belt and Road Initiative, the Master Plan for ASEAN Connectivity, and the ASEAN Framework Agreement on Services.

AMRO Director Dr Junhong Chang emphasizes need for the ASEAN+3 economies to build capacity and connectivity to successfully transition to the New Economy.