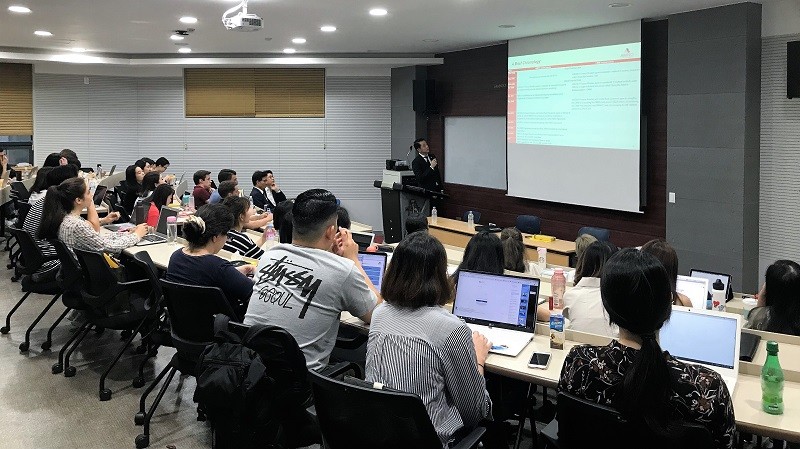 AMRO Deputy Directors Mr Yasuto Watanabe speaks to professors and students at the Graduate School of International Studies of Yonsei University in Seoul on September 17, 2018.

The lectures at the Graduate School of International Studies of Yonsei University and Hankook University of Foreign Studies (HUFS) were led by AMRO Deputy Directors Mr Yasuto Watanabe  and Mr. Yoo Byungseo, respectively, with the participation of AMRO’s Group Heads and around 150 professors and students at the host institutions.

Since the 1997 Asian Financial Crisis, in which Korea was among the hardest-hit economies, authorities in the ASEAN+3 region have worked together to strengthen the Regional Financial Safety Net in a bid to prevent a crisis and get better prepared for future crises. The CMIM, a multilateral currency swap arrangement between ASEAN+3 members and its surveillance arm, AMRO, were established in 2010 and 2011, respectively, to safeguard the regional macroeconomic and financial stability. Members include 10 members of the Association of Southeast Asian Nations (ASEAN) and China; Hong Kong, China; Japan; and Korea.

In the lectures, AMRO’s delegates highlighted AMRO’s unique roles and responsibilities in the regional and global financial systems, the potential of future crises, as well as risks and vulnerabilities in the region. They emphasized the relevance of the CMIM and AMRO to Korea’s experience during the financial crisis in 1997. They also made a strong case for further strengthening the CMIM and AMRO in an evolving global financial system. Participated professors and students showed strong interest in learning more about the roles of the CMIM and AMRO as well as the importance of enhancing regional macroeconomic and financial stability. In particular,  professors of the two host institutions – Dr Hahm Joon-Ho of Yonsei University and Dr Sohn Jongchil of HUFS – shared that it would be crucial to further enhance the CMIM as a way to address the perennial liquidity issues in East Asian economies arising from its intrinsic vulnerabilities and risks.

These two lectures are part of AMRO’s on-going public talks in the ASEAN+3 region to increase public understanding on the regional financial safety net.

AMRO would like to express its appreciation to the Faculty of Graduate School of International Studies of Yonsei University and Economics Division of Hankook University of Foreign Studies, and their students for their warm hospitality and active participation during the lectures.