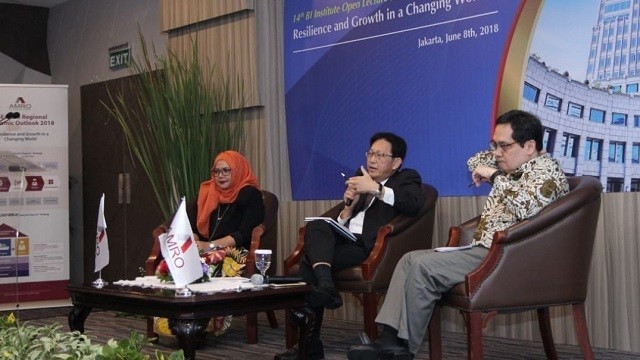 Fundamental global shifts in trade and production networks as well as rapid changes in technology make it crucial for the region to augment the traditional “manufacturing for exports” strategy with multiple engines of growth. This was highlighted by experts at a seminar themed “Resilience and Growth in a Changing World” co-hosted by the ASEAN+3 Macroeconomic Research Office (AMRO) and Bank Indonesia (BI) Institute on June 8, 2018 in Jakarta, Indonesia.

Attended by almost 100 participants representing various government agencies, financial institutions, associations, think tanks and embassies, the seminar used the ASEAN+3 Regional Economic Outlook (AREO) 2018 released by AMRO in early May as background information for discussion. The seminar focused on the regional economic outlook, as well as how the region can maintain its resilience and growth in the face of fundamental global forces of changes.

AMRO Chief Economist Dr Hoe Ee Khor, in his keynote presentation, highlighted that the economic outlook in the region remains robust, supported by sustained domestic demand with added impetus from the export upcycle. However, the region has to remain vigilant against spillovers from two near term risks: a faster-than-expected tightening in global financial conditions led by potential upside inflation surprises in the U.S, and rising trade tensions between the U.S. and major trading partners. 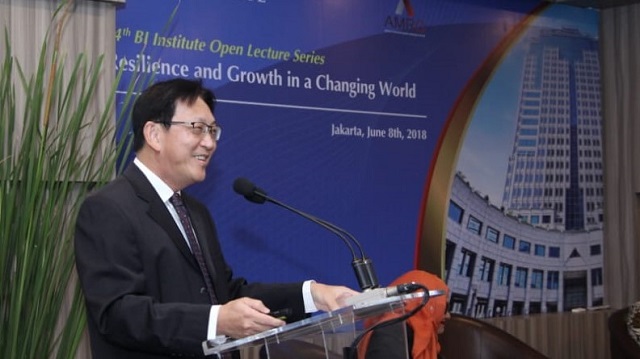 On the policy front, considering the external uncertainties, Dr Khor argued that it would be prudent for policymakers to prioritize financial stability over growth, with monetary policy on a tightening bias, and fiscal policy playing a supportive role while helping to facilitate structural adjustments. Macroprudential policies should continue to safeguard financial stability.

Dr Khor also touched upon the “manufacturing for exports” strategy, drawing on Indonesia’s experience. He highlighted that Indonesia’s manufacturing sector is mainly domestically oriented, reflecting the large consumption base. In addition, Indonesia’s export structure is skewed toward commodities such as palm oil, which are used as intermediate inputs by third countries for further processing and exports, hence the significant forward linkages in the global value chain (GVC). In contrast, other major ASEAN economies such as Malaysia and Thailand have established large manufacturing base for processing and/or assembly mainly for exports to third markets.

On services, Dr Khor noted that the sector is growing rapidly in Indonesia, underpinned by rising middle class and growing demand for modern services. Advances in technology is also making services more tradable and commoditized, helping to raise productivity and foster growth. Indonesia’s ride hailing app Gojek is a good example of how advances in digital technologies is fostering the growth of the sharing economy, helping to create demand for other services, such as transportation, logistics, mobile payment services. 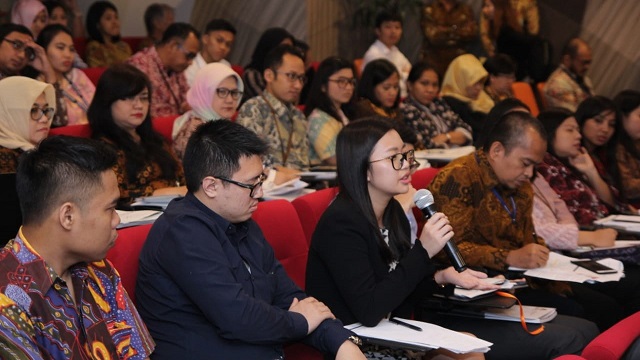 The seminar receives active participation and engagement from the audience.

The presentation was followed by a panel discussion moderated by the Director of BI Institute, Dr Arlyana Abubakar, and comprising Dr Khor and Dr Reza Siregar, Head of ASEAN and India Research, Institute of International Finance. The panellists agreed that Asian emerging markets (EMs) are the fastest growing region in the world, supported by resilient domestic demand with added impetus from exports. The key risks confronting global EMs are predominantly external, stemming from U.S. fiscal, monetary and trade policies, as well as geopolitical risks. On U.S. monetary policy, the risk of unexpected Fed rate hikes remain, especially if inflation were to surprise on the upside. On the risks from trade tensions, the panellists agreed that the real impact would only materialize over the medium term, although the immediate impact will fall on asset markets. Notwithstanding the external headwinds, the baseline outlook is for the region to maintain a generally robust external position in 2018, even amid continuing capital outflows from portfolio equities.

On the “manufacturing for exports” strategy, the panelist agreed that when it comes to global value chain participation, Indonesia’s manufacturing should be more externally oriented in order to earn foreign exchange to support its capital goods imports. Indonesia can also augment the traditional “manufacturing for exports” strategy by leveraging on the services sector, especially tourism, as a driver for growth and employment. In order to realize the full potential of the tourism industry, Indonesia needs to invest more in infrastructure and connectivity such as airports, railways, ports, and hotels.