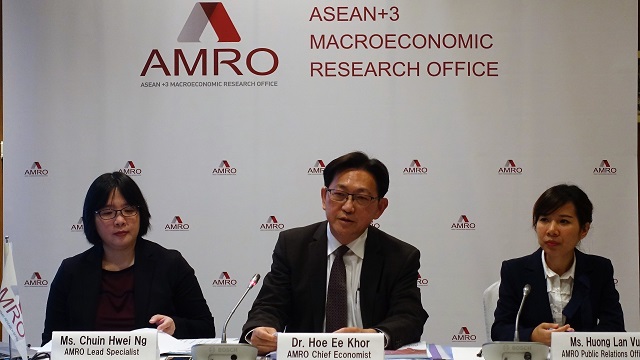 YOKOHAMA, JAPAN, May 4, 2017 – The ASEAN+3 region is expected to grow at 5.2 percent in 2017 with inflation under control, despite the global uncertainty, says a new report released today by the ASEAN+3 Macroeconomic Research Office (AMRO).

As AMRO’s annual regional surveillance publication, the ASEAN+3 Regional Economic Outlook (AREO) 2017 assesses the regional economic outlook and financial stability in 10 ASEAN countries, and China (including Hong Kong), Japan, and Korea. In this inaugural edition, the report also includes a thematic study of the region 20 years after the Asian Financial Crisis (AFC).

According to the report, growth of the two largest economies in the region, China and Japan, remains stable and robust, and will anchor the continuing growth in the region. Regional emerging markets of Korea, ASEAN-5 (Malaysia, Indonesia, the Philippines, Singapore, and Thailand) and Vietnam remain resilient even as volatility in global financial markets persists, while developing ASEAN economies of Cambodia, Lao PDR and Myanmar continue to grow and reap benefits from regional integration.

“It is encouraging to see the ASEAN+3 region has been resilient going into 2017,” says Dr Hoe Ee Khor, AMRO Chief Economist. “Under the current global environment, the region should prioritize financial stability while supporting growth with an appropriate policy mix, including targeted macroprudential policy measures and sustained structural reform.”

The report analyzes both the growth momentum and downside risks for the region in 2017. Growth will continue to be driven primarily by domestic demand while individual economies can reap benefits from regional trade and investment integration. However, the regional outlook is clouded by global uncertainty, including rising trade protectionism, tightening global financial conditions, and rising inflation. Compared to 2016, policy room in monetary and fiscal policy has generally narrowed. Buffers in foreign exchange reserves remain high but the risks of capital outflows from the region are significant amid global policy uncertainty.

In addition to the regional economic outlook, the report also takes stock of lessons learned during the last 20 years after the AFC. The AFC is a landmark event in the ASEAN+3 region that has shaped the subsequent foundations and trajectory of economic growth and regional integration, as well as policymakers’ perspectives on crisis management and resolution. In particular, the AFC provided the impetus to ASEAN+3 members to come together to develop a regional safety net supported by enhanced macroeconomic surveillance.

In the first decade after the sharp negative shock of the AFC, private investment and capital inflows in crisis-hit economies sharply declined. Consequently, to rebuild buffers and foundations for economic growth, affected economies had to undertake fundamental and significant policy adjustments, including more flexible exchange rate regimes, fiscal consolidation, and corporate and financial sector reforms.

These policy adjustments and reforms strengthened the economic fundamentals of the countries which enabled the region to weather the Global Financial Crisis (GFC) relatively unscathed. In addition, by remaining open to global and regional trade, foreign direct investment (FDI), and capital flows, the region continued to reap the benefits from growing regional integration and the emerging role of China in the formation of global value chains in the region. Intra-regional financial flows also increased, with Japan continuing its role as a major lender and investor in the ASEAN+3 region. Individual economies also took advantage of global capital inflows after the GFC to rebalance the drivers of growth from export-led to domestic-led demand, while mitigating the potential impact on financial stability through macroprudential policies.

In 2017, the ASEAN+3 region is once again tested with a new global environment of rising trade protectionism and tightening global financial conditions. A responsive policy framework should be developed to deal with potential external shocks and spillovers, the report recommends. Urgent structural reforms are also recommended to tackle bottlenecks to growth, including financing infrastructure needs and improving labor productivity.

“Together with their own strengthened domestic policy frameworks and buffers, enhanced regional financial cooperation among ASEAN+3 economies will improve their resilience against shocks and allow their economies to sustain relatively strong growth,” says Dr Khor.